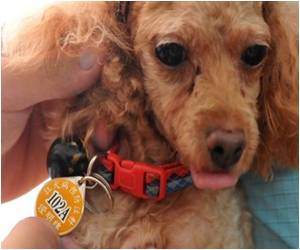 A delighted Bessie sniffs at the menu and chooses rabbit, licking the meaty sample even as she wags her tail in anticipation of a hearty meal.

The waitress at this new pop-up restaurant for canines puts Bessie's order on a low table next to a water bowl, and the small fluffy white Bolognese devours her plateful.

Pestaurace -- a fusion of "pes", or dog in Czech, and "restaurace" or restaurant -- is the Czech Republic's addition to a growing list of dog dining ventures around the world.


These include a deluxe dog food delivery service in India, doggy happy hours in the United States and a brick-and-mortar restaurant in Germany (cats welcome too).

Pheromones are the wonder chemicals that are known to significantly influence the love chemistry and sexual attraction between a man and woman.
Advertisement
The Czech take on the concept is a promotional picnic -- bow-wow scores a free meal while the petfood company gets the word out about its fare.

The freebie factor is a perk for Katerina Doubravova, an unemployed young woman visiting the Pestaurace tents at a dog show in the eastern city of Pardubice.

"It's a nice idea, even a dog can go out to eat," she says, as Ashley, her English Setter, nibbles on a rabbit morsel.

"When she goes to a restaurant with us, she lies there and waits, so now we'll swap roles."

- From homemade to store-bought -

Launched this year, Pestaurace hits the road for a cross-country tour in July at a time when petfood is booming in the former communist state.

The pre-1989 command economy did not cater to non-essential commodities, meaning pooches dined on leftovers or homemade chow.

But in the quarter century since they embraced the free market, Czechs are consuming more and more prepared foods, as noted by the ever-serious London-based Euromonitor International in a thick report on the issue.

It said there was a "significant trend" to high-quality dog food, and the sector in the Czech Republic is posting constant growth.

Pavla Sykorova, owner of an Alsatian named Nutty, is pleased by the variety now on offer.

"She's a bit picky, so I'm glad she's eating and that she can choose," Sykorova told AFP over the din of barks and whines.

Nutty takes seconds to polish off a plate of lamb she picked off the five-item menu, dabbed with samples to entice four-legged customers.

But not everyone is salivating over the new-style canine cuisine.

"I consider this a show, but I'm not in favour of exclusive restaurants for dogs," says Martina Mikova, whose charge is a Belgian Shepherd named Axim.

"I think that at home a dog can eat with more peace and rest afterwards."

Axim disagrees: he gulps down his rabbit in a jiffy, and when Mikova lets go of the leash, he dashes behind the tents hunting for more.

At the other table, a Parson Russell Terrier named Google nudges the menu.

The waitress brings over a plate of rabbit, but Google does not bite.

Teenage pooch-owner Franziska Slivkova puts the plate on the ground and feeds him herself.

Pestaurace consists of two adjacent party tents with the logo of the company, the Czech branch of Spanish animal feed chain Dibaq.

Each features a black table, green blankets and cushions for dogs and black cube seats for their human companion.

Chicken with vegetables, salmon with potato, lamb with rice and gravy, rabbit with rice and meatballs with poultry fat -- all sweetened by some extra meat -- are on the menu.

For dessert, bow-wow can choose from four flavours of biscuit: game, lamb, veal or poultry.

Doggy bags are, of course, an option.

Find a Hospital Find a Doctor Loram (2 mg) (Lorazepam) Turmeric Powder - Health Benefits, Uses & Side Effects Blood Donation - Recipients The Essence of Yoga Sinopril (2mg) (Lacidipine) How to Reduce School Bag Weight - Simple Tips Selfie Addiction Calculator Blood - Sugar Chart
This site uses cookies to deliver our services. By using our site, you acknowledge that you have read and understand our Cookie Policy, Privacy Policy, and our Terms of Use