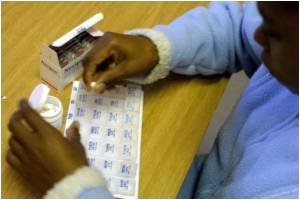 A popular anti-retroviral drug which is prescribed for patients with HIV may cause damage to brain cells and contribute to cognitive impairment, a new Johns Hopkins research suggests.

Nearly 50 percent of people infected with HIV will eventually develop some form of brain damage that, while mild, can affect the ability to drive, work or participate in many daily activities. It has long been assumed that the disease was causing the damage, but Hopkins researchers say the drug efavirenz may play a key role.

People infected with HIV typically take a cocktail of medications to suppress the virus, and many will take the drugs for decades. Efavirenz is known to be very good at controlling the virus and is one of the few that crosses the blood-brain barrier and can target potential reservoirs of virus in the brain. Doctors have long believed that it might be possible to alleviate cognitive impairment associated with HIV by getting more drugs into the brain, but researchers say more caution is needed because there may be long-term effects of these drugs on the brain.


"People with HIV infections can't stop taking anti-retroviral drugs. We know what happens then and it's not good," says Norman J. Haughey, Ph.D., an associate professor of neurology at the Johns Hopkins University School of Medicine. "But we need to be very careful about the types of anti-retrovirals we prescribe, and take a closer look at their long-term effects. Drug toxicities could be a major contributing factor to cognitive impairment in patients with HIV."

This medication is a non-nucleoside reverse transcriptase inhibitor (NNRTI), and active antiretroviral therapy (HAART) prescribed for the treatment of human immunodeficiency virus (HIV) type 1 either alone or with other medications.
Advertisement
For the study led by Haughey and described online in the Journal of Pharmacology and Experimental Therapeutics, researchers obtained samples of blood and cerebrospinal fluid from HIV-infected subjects enrolled in the NorthEastern AIDS Dementia study who were taking efavirenz. Researchers looked for levels of the drug and its various metabolites, which are substances created when efavirenz is broken down by the liver. Performing experiments on neurons cultured in the lab, the investigators examined the effects of 8-hydroxyefavirenz and other metabolites and found major structural changes when using low levels of 8-hydroxyefavirenz, including the loss of the important spines of the cells.

Haughey and his colleagues found that 8-hydroxyefavirenz is 10 times more toxic to brain cells than the drug itself and, even in low concentrations, causes damage to the dendritic spines of neurons. The dendritic spine is the information processing point of a neuron, where synapses  the structures that allow communication among brain cells  are located.

In the case of efavirenz, a minor modification in the drug's structure may be able block its toxic effects but not alter its ability to suppress the virus. Namandje N. Bumpus, Ph.D., one of the study's other authors, has found a way to modify the drug to prevent it from metabolizing into 8-hydroxyefavirenz while maintaining its effectiveness as a tool to suppress the HIV virus.

"Finding and stating a problem is one thing, but it's another to be able to say we have found this problem and here is an easy fix," Haughey says.

Haughey says studies like his serve as a reminder that while people infected with HIV are living longer than they were 20 years ago, there are significant problems associated with the drugs used to treat the infection.

"Some people do seem to have this attitude that HIV is no longer a death sentence," he says. "But even with anti-retroviral treatments, people infected with HIV have shortened lifespans and the chance of cognitive decline is high. It's nothing you should treat lightly."

Statistics tell us that the world HIV+ population has risen drastically from 8 million in 1990 to a whopping 33 million in 2007! Even more alarming is the fact that young people (below the age of 25) account for half of these infections! This is adequate proof for the lack of awareness among the general public even in these modern times. So take our quiz and brush up on the essential facts of HIV/
Advertisement
News A-Z
A B C D E F G H I J K L M N O P Q R S T U V W X Y Z
What's New on Medindia