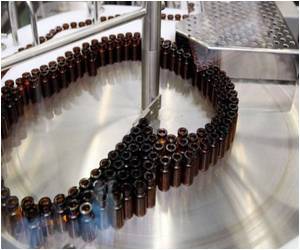 Launch of the first Phase I clinical trial of a new candidate TB vaccine designed to shield people latently infected with TB from developing active TB disease announced today by Statens Serum Institut and Aeras. The trial is being conducted by the South African Tuberculosis Vaccine Initiative (SATVI) at its field site in Worcester, in the Western Cape province of South Africa. Dr. Hassan Mahomed is the principal investigator.

"Two billion men, women and children live with latent TB infection," said Jim Connolly, President and Chief Executive Officer of Aeras. "It's daunting to comprehend that there is a vast reservoir of people with a 5-10% lifetime risk of becoming sick with TB. A vaccine that prevents TB disease in this population could save millions of lives, and this trial is a first step in assessing a vaccine candidate designed for this purpose."

On World TB Day 2011, Medindia interviewed Dr. P. Senthilkumar, Pulmonologist, to know the obstacles that hinder eradication of TB from the world.
Advertisement

The candidate TB vaccine (SSI H56-IC31) is a subunit vaccine containing recombinant TB proteins formulated in a proprietary adjuvant IC31® from Intercell. It is being developed under a consortium of researchers led by Peter Andersen at the Statens Serum Institut (SSI) based in Copenhagen. The consortium is supported as part of the Grand Challenges in Global Health, an initiative that fosters scientific breakthroughs needed to prevent, treat and cure diseases of the developing world.


"The development of urgently needed new TB vaccines requires a global effort," said Prof. Peter Andersen, the Vice President of Vaccine Research & Development at SSI. "The advancement of this candidate from an idea to the clinic working in collaboration first with the Grand Challenges consortium and now with Aeras and SATVI is an important and exciting milestone for all the researchers involved."

World TB Day 2011 enters into the second year of the two year campaign, "On the move against tuberculosis" exploring newer avenues in TB research and care.
Advertisement
This clinical trial will be the first to test this vaccine candidate in people. It will assess the safety and immunogenicity of SSI H56-IC31 in 25 adults, including participants with and without latent TB infection. SSI H56-IC31 has been tested in several pre-clinical studies with no safety concerns and has shown efficacy in small animal models administered both before infection and to latently infected animals. The vaccine was also shown to control clinical disease and reactivation in a non-human primate model. This is the first time a South African research institute has led a first-in-human Phase I clinical trial of a new TB vaccine.

"SATVI is delighted to be part of the trial at this early stage, which is testament to the high-regard that the developers have for our TB vaccine clinical research expertise to conduct these crucial early trials in humans," said SATVI Director, Professor Willem Hanekom.

SSI H56-IC31 is being developed for both adolescent and adult populations. The trial has been approved by the Medicines Control Council of South Africa. Preliminary results of this trial are expected at the end of 2012.

Drug - Food Interactions Diaphragmatic Hernia Hearing Loss Calculator Find a Hospital Sanatogen Find a Doctor A-Z Drug Brands in India Selfie Addiction Calculator Iron Intake Calculator Calculate Ideal Weight for Infants
This site uses cookies to deliver our services.By using our site, you acknowledge that you have read and understand our Cookie Policy, Privacy Policy, and our Terms of Use  Ok, Got it. Close
×