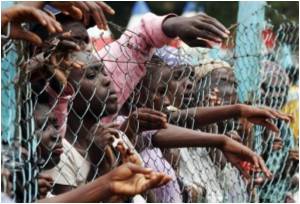 The theory that global warming could incite civil wars in troubled Africa has been rejected by an expert.

In his popular 2008 book Climate Wars, the US journalist and military historian Gwynne Dyer, said that climate change would put growing pressure on fresh water and food over the coming century, triggering social disorder, mass migration and violent conflict.


But, Halvard Buhaug, a political scientist with the Peace Research Institute Oslo in Norway has denied any such scenarios, reports Nature.


In a new research, he found virtually no correlation between climate-change indicators such as temperature and rainfall variability and the frequency of civil wars over the past 50 years in sub-Saharan Africa - arguably the part of the world that is socially and environmentally most vulnerable to climate change.

"The primary causes of civil war are political, not environmental," says Buhaug.

The analysis challenges a study published last year that claimed to have found a causal connection between climate warming and civil violence in Africa.

Marshall Burke, an economist at the University of California, Berkeley, and colleagues, reported a strong historical relationship between temperature and the incidence of civil war.

Disputing the validity of the study's findings, Buhaug said that Burke's study may have been skewed by the choice of climate data sets, and by their narrow definition of 'civil war' as any year that saw more than 1,000 fatalities from intra-national conflict.

The definition is at odds with conventional measures of civil war in the academic literature.

"If a conflict lasts for 10 years, but in only 3 of them the death toll exceeds 1,000, [Burke et al] may code it as three different wars," said Buhaug.

"You'd really like to apply as many complementary definitions as possible before proclaiming a robust correlation with climate change," he added.

Burke maintains that his findings are robust, and counters that Buhaug has cherry-picked his data sets to support his hypothesis.

Buhaug disagrees vigorously. "If they accuse me of highlighting data sets in favour of my hypothesis, then this applies tenfold more to their own paper."