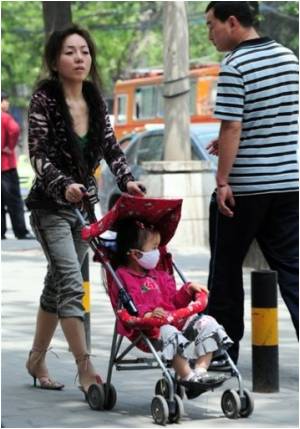 Li Fu is 29, owns five cars including a Ferrari and has a diamond-encrusted cell phone. Wang Qingzhan is 44, works as a cleaner and lives with his family in a tiny room that is about to be torn down.

Li and Wang are the faces of China's yawning wealth gap -- an unfortunate by-product of the country's stunning economic transformation and a problem that the ruling Communist Party aims to address in a new plan to revamp the economy.

When the gap is great between rich and poor, people are more prone to grow up with an anti-social lifestyle - a drug user, a criminal, less educated, obese,or pregnant as a teenager etc.
Advertisement

That plan -- to be formally adopted by the National People's Congress, the rubber-stamp parliament that will convene for its annual session from Saturday -- aims to boost wages and rebalance growth via higher domestic consumption.


The idea of buying more is certainly not a problem for the flashy Li, who grew up poor but worked his way up the ladder in the world of design and now owns his own media post-production company.

Chinese state media reported that the rural-urban wealth gap was the widest last year since the nation launched its economic transformation three decades ago.
Advertisement
"When I first started working, despite all my best efforts, my salary remained low. The first year, I earned 600 yuan ($90) a month. I worked like that for four or five years -- that was a tough time," Li told AFP.

"Only when I opened my own company did I start to earn more and more money," said Li, who now owns three flats in Beijing along with his cars. Along with the fire-engine red Ferrari, he has a Porsche.

Li -- sporting Ray-Ban sunglasses in the middle of a bleak winter, his hair carefully brushed into his face -- says he is one of the winners in China's economic boom, which has seen blistering growth for the past decade.

He is a dollar millionaire who spends his holidays in the south of France, Milan or Monte Carlo, where he likes to take in the annual Formula One race. In his free time, he races cars outside Beijing.

"The gap between rich and poor is a totally normal phenomenon in China's economic development, which only began 30 years ago," Li says.

"It's not like in the West, where more than 200 years of development has allowed for a vast accumulation of wealth."

In a country where "guanxi" -- connections with high-level officials or businessmen -- are seen as vital to moving up the ladder, Li nevertheless insists his success is the product of pure determination and simple hard work.

Benjamin Fu owns a luxury car dealership on Jinbao Street -- Beijing's equivalent of New York's Fifth Avenue -- where everything from the Jaguar XJL to the Pagani Zonda R are on offer. Some cars are worth millions of dollars.

"My customers are mainly artists, businessmen and stars. Most of them are not from Beijing," Fu says, taking a deep drag on his cigarette.

The dramatic transformation in recent decades has created dozens of dollar billionaires in China, but also left millions more languishing at the bottom of the pile in a country still marked by grinding poverty among the rural masses.

With its new five-year plan for 2011-2015, the leadership in Beijing hopes to damp down mounting public concerns about soaring inflation and the perception that many of China's 1.34 billion people are being left behind.

Wang, from the central province of Henan, is one of the less fortunate. He is one of the more than 200 million migrants who have left their homes in the countryside in search of a better life, but end up as second-class citizens.

"If I don't do odd jobs, I can't take care of anything here -- my kids' schooling, food, accommodation.... One person has to have two jobs. Only then can we get by."

Wang -- wearing a heavy cloth jacket with threadbare sleeves, his hair in complete disarray -- lives with his wife and two teenage sons in a room with crumbling walls that measures about 10 square metres (107 square feet).

He has no "guanxi" to give him a leg up.

As the family does not have a Beijing residency permit, the children cannot go to school for free in the capital and so spend much of their time in Henan, far from their parents.

Husband and wife cram into the bottom bunk, with only an electric radiator for heat -- their sons sleep above them when they are in town. The ceiling does not appear to be water-tight, while the family's belongings are stashed in a small chest of drawers.

The Wangs prepare meals on a hot plate. There is no shower or toilet. The surrounding roads are unpaved and the family pays 350 yuan a month in rent. The neighbourhood will soon fall victim to the wrecking ball.

"Life is difficult," Wang says with a sigh.

Over A Million British Children Mired In Poverty

The economic situation in Britain that once ruled major parts of the world is turning grim. Predictably it is the children who get hurt most.
Advertisement
<< Scientific Research and Development to Soon Be Ramped Up In...
'Brain Training' App For Research into Ageing >>

The Essence of Yoga Color Blindness Calculator Noscaphene (Noscapine) Daily Calorie Requirements Selfie Addiction Calculator Blood - Sugar Chart Calculate Ideal Weight for Infants Post-Nasal Drip Diaphragmatic Hernia Find a Hospital
This site uses cookies to deliver our services. By using our site, you acknowledge that you have read and understand our Cookie Policy, Privacy Policy, and our Terms of Use