Scientific Research and Development to Soon Be Ramped Up In India 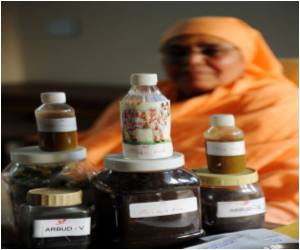 India has about as many illiterate adults as the entire population of the United States, but there is no doubt in anyone's mind that it possesses the ingredients to become a science super power.

A scientific revolution sweeping India will soon place it firmly within the major world economies.

Recently, the southern Indian state of Kerala played host to the annual Indian Science Congress. The event was on a scale unimaginable anywhere else in the world. Thousands crowded into huge white tents to hear lectures by physicists and rocket scientists, while wide-eyed schoolchildren posed for photographs with Nobel prize winners.


Enthusiasm wasn't even weakened by the midday heat, which caused some visitors to faint.

India has reported over 90 percent decline in polio cases in 2010 as compared to 2009, according to Union Health and Family Welfare Ministry.
Advertisement
He said then: "There's no doubt about it: the country is furiously pursuing development through science and technology. The aim is to more than double investment in research and development, which could put it in the same league as Japan and the US."

According to The Guardian, most industrialized countries spend around two percent of their Gross Domestic Product (GDP) on research and development. India, on the other hand, spends 0.8 percent, but by next year, it hopes to ramp this up to 1.2 percent, and in the longer term, is determined to reach two percent - well ahead of China, on 1.5 percent.

The paper opines that India's trajectory could eventually see it outpace Britain - once the world's science powerhouse.

Currently as the world's 11th largest economy, with a GDP growth rate of around nine percent, India hot on the heels of Russia and Canada, and is already wealthier than Australia and Spain.

India's scientific revolution has already begun. Among the 600,000 engineering graduates produced annually, is a growing cohort of innovative geeks.

Expertise in western software is starting to transform into a culture of originality in India, and therefore, it won't come as surprise that by 2015, the country's software industry will be worth 12 billion dollars.

Though most Indian laboratories struggle for high-quality equipment, hundreds of biomedical scientists are pooling research to develop what may be the first effective cure for tuberculosis. The Open Source Drug Discovery project, funded by the government on a fraction of what Big Pharma would require, is creating the world's biggest online repository of information about the TB bacterium and how to combat it.

The engineering sector saw a growth in job creation of 63 percent last year, according to India's Associated Chambers of Commerce and Industry. And in the coming year, India is expected to create between 10 and 15 million jobs, particularly in biotechnology and IT.

Scientists are creatively overcoming shortfalls in resources to ensure quality of research; and engineers are inventing cheap technologies for the benefit of everyday people. India has become a nation of passionate, hard-working geeks.

The West may think India is still in the gutter, but it is looking at the stars.

With the highest adolescent population in India, the real challenge for the nation is to provide nutrition, health and education in this segment, especially for girls, according
Advertisement
News A-Z
A B C D E F G H I J K L M N O P Q R S T U V W X Y Z
What's New on Medindia