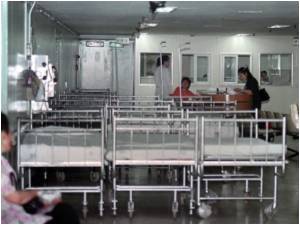 Many more infants and kids with formerly lethal health problems are surviving on account of care advances. Many, however, are left with lifelong neurologic impairment. A Children's Hospital Boston study of more than 25 million pediatric hospitalizations in the U.S. now shows that neurologically impaired children, though still a relatively small part of the overall population, account for increasing hospital resources, particularly within children's hospitals. Their analysis, based on data from the Agency for Healthcare Research and Quality Kids' Inpatient Database (KID), was published online January 17th in PLoS Medicine.


Within children's hospitals, neurologically impaired children accounted for an increasing proportion of resources: In 2006, they accounted for 25 percent of all bed days (up from 21.8 percent in 1997) and 29 percent of hospital charges ($12 billion, up from 27 percent in 1997).
Advertisement
"Our findings suggest that children's and non-children's hospitals are caring for increasingly different populations of children," says first author Jay Berry, MD, MPH, an attending physician in the Complex Care Service at Children's Hospital Boston. "Children with neurologic impairment tend to require expensive, lengthy hospitalizations. As policymakers increasingly focus on healthcare costs, we must be careful to not jeopardize the care these children receive as health reforms are considered."

The researchers note that improved care delivery and coordination could lead to reduced hospital utilization and better patient outcomes. Children with severe neurologic conditions commonly have additional health problems, such as respiratory and feeding problems, that make their care needs more complex. Yet studies indicate that pediatric providers often feel unprepared to assess and treat them.

The result, the researchers write, is uncoordinated, crisis-driven care that can lead to a disproportionate share of emergency care and frequent re-hospitalizations that drive up costs. "We're nervous that many children with neurologic impairment are without a healthcare provider who is taking charge of their care and making sure that all of their health care needs are adequately addressed," says Berry.

"Children with severe neurologic impairment tend to have more health problems as they reach adolescence and young adulthood," says Berry. "This coincides with a difficult period where they begin to outgrow their pediatric providers, but have trouble transferring their care to adult providers."