Cause for Dyslexia Hidden in the Human Eye Cells 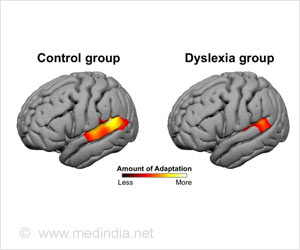 Close to 700 million people struggle with dyslexia across the globe. Dyslexia, or the condition that hampers persons' reading abilities, is often characterized as a neurological issue. New research suggests that dyslexics carry unusually dominant round spots in both eyes, which cause blurring and confusion.

According to a new study, people with dyslexia may not have a dominant eye, which may cause the "mirror effect that disrupts their ability to read". Since most humans possess only one dominant eye, dyslexic people have trouble distinguishing left from right and often see letters move around in the wrong order.

Advertisement
‘People with dyslexia may not have a dominant eye, which may cause the "mirror effect that disrupts their ability to read.’

A duo of French scientists said they may have found a physiological, and seemingly treatable, cause for dyslexia hidden in tiny light-receptor cells in the human eye.


In people with the reading disability, the cells were arranged in matching patterns in both eyes, which may be to blame for confusing the brain by producing "mirror" images, the co-authors wrote in the journal Proceedings of the Royal Society B.
Advertisement
For the study, 60 participants' (only half were dyslexic) eyes were examined. Non-dyslexic people had spots that revealed one eye was dominant over the other. While the spots in each eye found in dyslexics indicated that no eye was dominant.

Not having an eye that is dominant can create confusion in the brain by creating "mirror images". This makes it difficult to read and learn.

Brain Scans to Anticipate Early Dyslexia and Reading Difficulties
Brain scans could spot children with dyslexia and other reading difficulties before they experience ...

Faulty Brain Wiring Linked to Dyslexia
A block in the brain wiring could be the possible reason that makes dyslexic individuals struggle .....

Scientists Discover Genetic Origins of Dyslexia and Language Impairment
Genetic variants that can predispose children to dyslexia and language impairment, increasing the .....

Dyslexias Effect on Brain Differs With Gender
Dyslexia may affect different parts of the brain in males and females according to a new study....