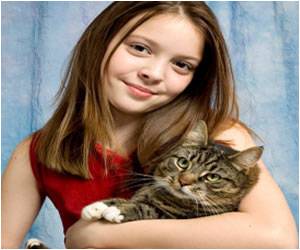 Pet cats pose serious risk of illness to humans, reveal experts. A thousand people a day are infected with a parasite called toxoplasma that is carried by the feline, as a result up to 70,000 people become ill every year.

The parasite can cause birth defects, blindness and dementia and has been linked with diseases like schizophrenia and other psychotic disturbances.

It is carried mainly by cats, as they are the only animals it can reproduce inside, the Daily Express reported.


According to a research by the Food Standards Agency, it can be transferred on to the humans if they eat contaminated food.

In particular the study shows that some sheep have been exposed to parasite after coming in contact with cat faeces, meaning that humans could be infected by eating an under-cooked lamb.

Ageing is referred to the accumulation of changes that brings a person closer to death.
Advertisement
Humans are also at risk from food or water that has been contaminated with cat faeces or from contact with cat litter. The parasite also poses a serious risk to babies in the womb.

It is said that one in a hundred of Britain's eight million cats could carry the bug.

The Food Standards Agency is expected to highlight the scale of toxoplasma infections in its "risk profile."

"Toxoplasma is more important, or as important, as salmonella," Richard Holliman of St George's Hospital in London, said.

"It can be devastating. A child born with congenital Toxoplasma is damaged for life," he added.

Experts want toxoplasma to be included into notifiable diseases.

People who are infected with a parasite, which was thought to be harmless and found in many people, may actually can cause subtle changes in the brain that could lead to suicide attempts.
Advertisement
<< Computers Reduce Dementia Risk
Research Finds Increased Risk of High Blood Pressure from St... >>

A group of vets have claimed that if your cat pesters you for food, it could be a sign that they are in the grip of eating obsession.
Advertisement
News A-Z
A B C D E F G H I J K L M N O P Q R S T U V W X Y Z
What's New on Medindia

Calculate Ideal Weight for Infants Drug - Food Interactions Nutam (400mg) (Piracetam) Iron Intake Calculator Post-Nasal Drip Blood Donation - Recipients The Essence of Yoga Daily Calorie Requirements Sinopril (2mg) (Lacidipine) Find a Hospital
This site uses cookies to deliver our services. By using our site, you acknowledge that you have read and understand our Cookie Policy, Privacy Policy, and our Terms of Use