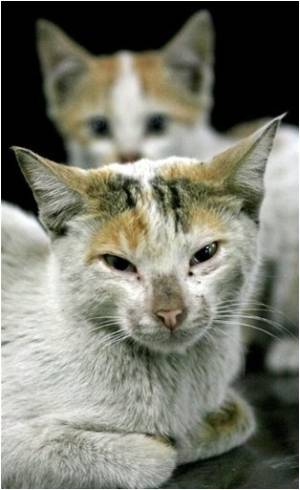 A group of vets have claimed that if your cat pesters you for food, it could be a sign that they are in the grip of eating obsession.

While doting owners might find it endearing when their hungry feline mews and paws at them, researchers say this eagerness to eat can indicate 'psychogenic abnormal feeding behaviour'.

Even Pets Battle the Bulge in Britain

After fat and obese people, it is now time for fat cats and dogs in Britain
Advertisement

Other symptoms of the condition apparently include a bottomless appetite and c, such as grabbing the cat food tin with their paws and 'growling and hissing'.


For the study led by Paolo Mongillo from the University of Padua in northern Italy, the vets studied eight-month-old Otto, a male Siamese cat who would devour his food before stealing from other cats' bowls and jumping on the table to scoff his owners' dinner.

Mice can be engineered to overcome their fear of their arch enemies, cats, it looks like. Japanese scientists have managed the feat.
Advertisement
He even ate plastic toys.

After finding no medical explanation for his behaviour, they diagnosed him with the first confirmed case of food obsession.

The vets prescribed a regime of behavioural therapy, which included banning Otto's owners from eating in front of him, scheduling regular playtimes but telling them to ignore him at other times, and rewarding calm behaviour.

Gradually, Otto was allowed back into his owners' presence at mealtimes, and after a while they were even allowed to eat 'appealing' foods such as fish in front of him.

According to the researchers, within five months the problem appeared to have been cured.

"The cat did not show any abnormal behaviour at the sight of food and it remained relaxed when present at the owners' meals," the Daily Mail quoted the researchers as writing.

The study has been published in the Journal of Veterinary Behaviour.