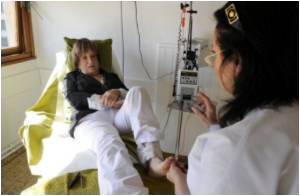 Beating Bowel Cancer, a charity organization has organized the Be Loud, Be Clear campaign week, to raise awareness of screening for the disease.

Bowel Cancer is the second biggest cancer killer in the UK. There are no discernible symptoms, so older people between the ages of 60 and 75 are being vigorously encouraged through the campaign to make use of the screening kits during the awareness week.

Older people who are registered with a GP will automatically receive a test kit through the post and the returned kits are processed quickly and further appointments are scheduled if a problem is noted. Dr Linda Juby, clinical director of the bowel cancer screening service in Bradford and Airedale, is backing the campaign and has urged everyone eligible for screening to return their kit. "The earlier you catch a cancer the better and that is the idea of the screening programme," she said.


Mark Flannagan, Chief Executive of Beating Bowel Cancer remarked,  "I have no doubt that if everyone took up screening when given the chance, bowel cancer would no longer be the UK's second biggest cancer killer."

An ideal tumor marker for a cancer should be specific to that cancer and not generate false positive results.
Advertisement
<< A Mouth-watering Study!
Exercise Improves IBS Symptoms >>

Nutam (400mg) (Piracetam) Calculate Ideal Weight for Infants A-Z Drug Brands in India Turmeric Powder - Health Benefits, Uses & Side Effects The Essence of Yoga Sanatogen Hearing Loss Calculator Color Blindness Calculator Sinopril (2mg) (Lacidipine) Find a Hospital
This site uses cookies to deliver our services. By using our site, you acknowledge that you have read and understand our Cookie Policy, Privacy Policy, and our Terms of Use