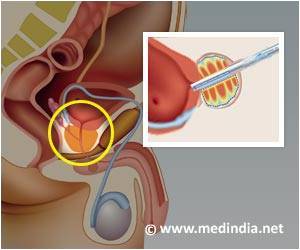 The most common cancers in men is Prostate cancer and it's early treatment is usually very successful.

However, like other cancers, obesity increases the risk of aggressive prostate disease. New research, published in BioMed Central's open access journal BMC Medicine, finds that the fat surrounding the prostate of overweight or obese men with prostate cancer provides a favorable environment to promote cancer growth.

Fat is a generally underrated organ. Not only is it an energy store but it secretes a wide range of growth factors, cytokines and hormones, including leptin and adiponectin, and is a major player in the immune system, which protects the body from infection and disease. But too much fat can cause these systems to go haywire and can increase risk of diabetes, cardiovascular disease and cancer.


An international team led by Prof Gema Frühbeck and Dr Ricardo Ribeiro analyzed fat, from around the prostate, taken from patients undergoing surgery for prostate disease. Samples were included from men with benign prostatic hyperplasia (BPH), prostate cancer (PC), and from men where their cancer was no longer confined to the prostate. The men were also classified as being either lean (BMI<25) or overweight /obese (BMI>25).

Treatment options of prostate cancer includes waiting, surgery, radiation, hormone therapy, chemotherapy, cryosurgery or biologic therapy.
Advertisement
Regardless of type of prostate disease the overweight men had different levels of gene activity in the fat surrounding their prostates compared to the lean men. This included genes which encode proteins involved in immunity and inflammation (such as LEP, which encodes the protein leptin), and cell growth and proliferation (including ANGPT1 which encodes angiopoietin 1), fat metabolism and programmed cell death.

Additionally the activity of more genes was altered between hyperplasia and prostate cancer, and between cancer and non-confined cancer, suggesting a gradual increase in dysregulation during cancer progression.

Prof Frühbeck explained, "Both LEP and ANGPT1 encode proteins which are thought to have roles beyond adipose tissue itself, especially because prostate cancer cells have receptors for leptin, and angiopoietin 1. Taken together with the abnormal activity levels of other genes they will ultimately foster fat mass growth, reduce immune surveillance, and promote the formation of new blood vessels, so producing a favorable environment for prostate cancer progression."

Dr Ribeiro continued, "In an increasingly obese population, understanding how fat, especially the fat surrounding the prostate, can influence the growth and severity of prostate cancer may provide an opportunity for implementing personalized lifestyle and therapeutic strategies."

This article is part of the thematic series Metabolism, Diet and Disease from BMC Biology and BMC Medicine.

A potential vaccine against prostate cancer shows positive results after the completion of its second round of clinical trials, say researchers.
Advertisement
<< Structure of the Brain Undergoes Change
LIFR: Suppressor of Breast Cancer Metastasis >>