Burning Topic of Interest in Pakistan is the World Cup 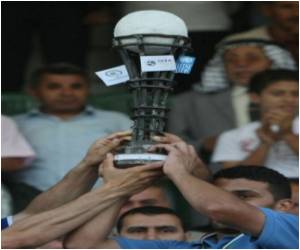 Pakistan's biggest city this week issued a fresh reminder of its reputation for chaos and violence but on its teeming streets, the more burning topic of interest is the World Cup now under way.

A corner of Karachi will forever be Brazil. The "beautiful game" offers residents of Pakistan's commercial metropolis a brief respite from the maelstrom of violence that blights their everyday lives.

Earlier this week Islamic militants laid siege to the city's airport in a sophisticated nighttime raid that killed 38 people, the latest in a series of militant attacks to bring chaos to the country's vital economic hub.


But in the Lyari neighbourhood, the talk is all football.

Most of the homes in this gang-blighted slum are festooned with the flags of different national teams, with Brazil's yellow and green colours by far the most popular.

The protests, strikes and general malaise ahead of the World Cup in Brazil have left most Brazilians morose and this is surprising given Brazil's long-time love affair with football.
Advertisement
Local resident Mohammad Ameen was busily preparing for his wedding Friday. Yet he was equally determined not to miss out on any footballing action, despite cricket ranking far ahead of football for most Pakistanis.

"I can't miss the World Cup," the 27-year-old said. "I have asked my relatives to come early so that we can wrap up the ceremonies early and I can watch the match with my friends."

Lyari has overcome miserable facilities and a notorious reputation for gang violence that has killed hundreds of people over the past 15 years to produce the country's best football players.

Former Pakistan international Aurangzeb Shahmir, who lives in the neighbourhood, said local residents are obsessed with the tournament, even if his countrymen have never even qualified for the finals.

"When you come to Lyari these days, you will realise that the football World Cup is on," he said.

Finding a working television is not easy in a city beset by regular power outages. Like thousands of fans, Shahmir almost missed the opening ceremony on Thursday night after much of the city's southwestern suburbs were plunged into darkness.

"The power came on just minutes before the opening ceremony, so I was lucky. But we appeal to the authorities to reduce load-shedding (rolling blackouts) so that we can watch all the matches," he said.

In Malir, which lies on the western edge of Karachi airport, a football fiesta is also under way as people do their best to forget about how Pakistan's aviation hub was briefly turned into a war zone only a few days before.

"We started preparations for the World Cup late because of the airport attacks," said local resident Jalil Baksh, whose house is painted with a tournament schedule and group standing tables. "But now we can't wait any more as the festival is on."

The timing of the tournament suits school children, who are currently on their holidays and can stay up late into the baking summer nights.

"I am gearing up to watch matches and there will be no school to worry about," said local student Abbas Ali Shabbir, an avid football fan.

Those who can afford it have also taken advantage of a recent relaxation of visa restrictions to go and watch the games in person.

"We have issued visas to around 200 people from Pakistan, while some 300 Pakistanis are travelling to our country from other parts of the world," Brazil's ambassador Alfredo Leoni told reporters in Islamabad on Thursday.

"Here in Pakistan, we've given 100 percent waiver on visas to Pakistani fans to help them enjoy football extravaganza in our country," he added.

But for the vast majority of Karachi's estimated 20 million inhabitants, a television -- and a prayer that the city's electricity supplies hold up -- will just have to do.

While the world's first transgender professional football player, Jaiyah Saelua, revealed that she wants to hang up her boots next year.
Advertisement
<< Gujarat CM Wants State to be Slum Free by 2019
Benefits of Canola Oil for People With Type 2 Diabetes >>

Footballers in England does not believe that the menace of match-fixing has affected the game, according to an international survey.
Advertisement
News A-Z
A B C D E F G H I J K L M N O P Q R S T U V W X Y Z
What's New on Medindia

Paresthesias
News Archive
News Resource
Advertisement
News Category
Parents are 'Winging It' on Their Kids' Mobile Use Ankle and Ankle Movements While Riding an Hoverboard Is It Healthy to Let Your Mind Wander? Walk Till it Hurts: Good News for Peripheral Artery Disease Patients Plus Size Models and Social Media: Where Do They Fit In?
More News
Sign up for Wellness Consult a Doctor Sign up for Selfcare