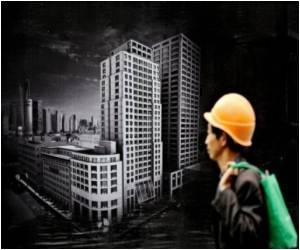 A French skyscraper climber, who has been dubbed 'Spiderman', has scaled the world's tallest tower in Dubai.

Alain Robert, 48, began his ascent of the 2,717-tall Burj Khalifa just before sunset, strapped to a safety harness tethered more than 100 stories up, in accordance with the requirements of the organisers, the Daily Mail reported.

Before he began he said that he expected his climb up the silvery, glass-covered Burj to take six or seven hours, and as night fell, a row of powerful spotlights shone on the side of the tower to light the way.


He hoisted himself up along a central column, mostly free of decorative rows of pipes that could slow his ascent.

But he did not use the rope to pull himself up, and instead gripped the glass and narrow metal ridges like a rock climber with his feet and bare hands.

Dozens of visitors lined up to ascend the viewing deck of the world's tallest tower in Dubai on Monday, which reopened after an elevator breakdown forced its closure only a month after
Advertisement
An ambulance, with a stretcher at the ready, was parked alongside other emergency vehicles at the Burj's base.

Robert stayed in a Dubai hotel before the climb, doing push-ups, pull-ups and stretches, and loading up on carb-filled foods such as pasta in a room overlooking the target of his latest adventure.

Robert website says he has climbed more than 70 skyscrapers, including the Empire State Building, Chicago's Willis Tower and the Petronas Towers in Kuala Lumpur.

He conquered Taiwan's Taipei 101, which before the Burj was the world's tallest building, in 2004.

Dubai's Burj Khalifa tower, the new tallest building in the world, is 828 metres tall, it was revealed on Monday at the skyscraper's official opening in the Gulf emirate.
Advertisement
<< Pubs Closing By the Day in the UK
New Method to Lower Blood Pressure >>