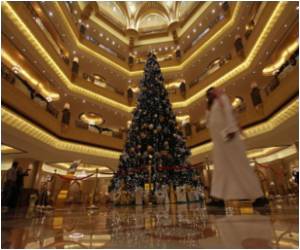 The hotel will be erected in western Beijing's Mentougou district some 30 kilometres (18 miles) from the Chinese capital's centre, the state-run Beijing Morning Post said in a Thursday report, quoting a local parliamentary meeting.

Dozens of visitors lined up to ascend the viewing deck of the world's tallest tower in Dubai on Monday, which reopened after an elevator breakdown forced its closure only a month after
Advertisement

A district official, who declined to give his name, confirmed the project and its price tag in comments to AFP on Friday.


He said that the Saudi side was expected to foot the entire bill but he refused to provide other details, such as why such an expensive project would be located in the underdeveloped rural area.

Dubai's Burj Khalifa tower, the new tallest building in the world, is 828 metres tall, it was revealed on Monday at the skyscraper's official opening in the Gulf emirate.
Advertisement
The Beijing Morning Post said the building's design would be patterned after the 828-metre (2,717-foot) Burj Khalifa's distinctive slender, tapering design, but did not say how tall the planned structure would be.

The "seven-star" classification is not officially recognised internationally, as no formal body awards ratings above five stars, but there are a handful of luxury hotels around the world that still use the distinction.

Dubai's Burj Al Arab is one such establishment, and in Beijing, the Pangu 7 Star Hotel built near the 2008 Olympic stadium also claims the rating.

The announcement of the Mentougou project comes at a time when China is attempting to crack down on high-end developments and use more land for affordable housing, amid general discontent over soaring property prices.