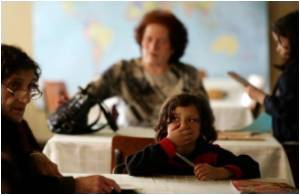 Visitors to Rudnik can see for themselves the 'twin' phenomenon the small village in south-east Bulgaria has become famous for.

This otherwise rather unremarkable miners' village of around 5,000 inhabitants gives new meaning to the term "twin town", with its unusually high -- and so far inexplicable -- twin population.

The phenomenon has yet to be scientifically investigated but the locals insist it has something to do with the water.


Tereza Todorova is a twin as was her mother. And both Tereza and her twin sister have given birth to twin daughters. Furthermore, their aunt -- that is to say, their mother's twin -- married a man who is also a twin. In fact, all in all, there are five pairs of twins in Tereza's family.

In-depth guide for expecting mothers to overcome health complications related to early or late pregnancy. Anemia, urinary infection, diabetes, premature labor to name a few.
Advertisement
They are not alone: the official statistics show that a total of 56 pairs of twins have been born in Rudnik since 1944.

Last year, out of 60 births in the village, four resulted in twins, a ratio of 6.7 percent, way above the national average of 1.5 percent.

In fact, the village is so proud of its apparently special twinning powers that it launched an annual "twin" festival five years ago, a reunion to which every pair of local twins, both young and old, is invited each spring.

This year, two teenage girls in traditional dresses planted a tree in a small garden outside the mayor's office, while two Roma girls swirled around in their magenta dresses, impossible to tell apart.

"When I was married, my aunt, who has twins, told me not to lose hope if I didn't have twins the first time. But I wanted them so much, it worked!" Milena Slavova, a 29-year-old mother, told AFP, as her carbon-copy three-year-old sons Dimitar and Stoyan, dressed in identical khaki shorts and green T-shirts, climbed a nearby tree.

"Here it's normal, we are twins like many others... our grandmother was also a twin," say 59-year-old fraternal twins Urmuz and Amide Mustafa, two unemployed miners.

The Mustafas are Roma, and it is not only among the Bulgarian population of Rudnik that multiple births are common, but among Roma families too.

As a result of increasing use of in-vitro fertilisation, multiple births in Bulgaria, as in other countries, have surged in recent years. Last year, out of a total 80,956 births nationwide, some 1,181 pairs of twins were born.

But in Rudnik, which lies 15 kilometres (nine miles) south-west of the Black Sea port city of Burgas, the locals insist the twins are conceived and born naturally.

"Whoever drinks from Rudnik's mineral water, breathes the local air and stumbles over the stones in Rudnik, will definitely have twins," says Dimka Katelieva, who masterminded the annual spring twin festival.

The local authorities insist that Rudnik's water "meets all the norms" and no specialised scientific research has been was conducted so far on the village's mysterious twin phenomenon.

One leading Sofia gynaecologist and researcher, who declined to be named, suggested a possible explanation might be "the presence of elements (in the water and soil in the region) that stimulate ovulation, that is the production of multiple ovums."

But for Ivo Kremenski, a professor at the national genetics laboratory in Sofia, it is simply a matter of heredity.

"Some couples are possibly distantly related, since migration in these villages was limited and genetic material remained unchanged," Kremenski said.

The twins themselves appear to pay little heed to the mystery of Rudnik.

But for their parents, the cost of having an extra mouth to feed is more of a burden than a joy in a village where unemployment is high and most people live below the poverty line.

"I got a one-off payment of 200 leva (100 euros, 123 dollars) when I gave birth to twins. Now, I receive 140 leva (70 euros) in all per month for them and their older brother. That's nothing. And my husband, who is a construction worker, is often without work," complains a young mother of 18-month-old twin boys.

Fertility Drugs are a Major Cause of Multiple Births

Fertility drugs is known to be a major cause of premature births,because these drugs cause a high percentage of multiple births, the March of Dimes said today.
Advertisement
<< Brain's Perception of Body Distorted
Social Networking Sites - a Threat for Adopted Children >>

Find a Doctor Noscaphene (Noscapine) Indian Medical Journals Daily Calorie Requirements Drug - Food Interactions Find a Hospital Accident and Trauma Care Sinopril (2mg) (Lacidipine) Blood - Sugar Chart Nutam (400mg) (Piracetam)
This site uses cookies to deliver our services. By using our site, you acknowledge that you have read and understand our Cookie Policy, Privacy Policy, and our Terms of Use