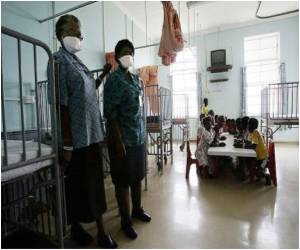 A groundbreaking new test can accurately diagnose drug-resistant tuberculosis (TB) in as little as two hours, researchers wrote in a study published Thursday in the New England Journal of Medicine.

The test -- remarkable not only for its ease-of-use and accuracy, but its cost-effectiveness -- works on the molecular level, identifying genetic markers for the illness in the saliva of test subjects.

Researchers said the result is a far quicker diagnosis than when using traditional testing methods.


"Early, rapid and accurate detection of TB, including identification of drug-resistant strains, is critical to effectively treating the disease, reducing secondary resistance, stopping further transmission and saving lives," said Giorgio Roscigno, chief executive officer of the Foundation for Innovative New Diagnostics (FIND), one of the funders of the research.
Advertisement
The milestone, he said, can "help save the millions of lives needlessly lost to TB every year."

The test not only detects the presence of TB, but also identifies whether it is the strain of the disease that is resistant to rifampin -- a frontline medication used to treat the illness.

Of 1,730 patients suspected to have drug resistant TB, the test was able to correctly identify 98 percent.

"The need for accurate and rapid detection of tuberculosis for the growing at-risk populations in the developing world has been well-documented," said John Bishop, Cepheid, the company which developed the molecular diagnostic exam.

Experts say a speedy diagnosis of TB, particularly the drug-resistant variant, is especially vital in sub-Saharan Africa and Southeast Asia because of the close connection between HIV and TB.

Existing tests to diagnose TB generally take weeks before results are available -- a critically important window of time for patients with compromised immune systems who need may need immediate treatment.

The study's authors said that undetected and untreated, 90 percent of these patients die within months of first contracting tuberculosis, underscoring the need for quick detection and treatment.

TB remains one of the major causes of disability and death worldwide, with an estimated 1.8 million deaths in 2008 and an increasing incidence of drug-resistant disease.

Source: AFP
Advertisement
<< Smell and Sight of Alcohol Seems to be Enough to Get Hooked
Just One Interaction With a Person is Enough for Kids to Ju... >>

Genomic Marker may Help Identify Patients Who Carry Risk of Tuberculosis
It may soon be possible to identify patients who would develop tuberculosis as scientists are now .....

Joint Effort from Public and Private Health Sector Urged to Fight Tuberculosis
In Asia, partnerships between public and private healthcare providers are especially relevant in ......

New Tuberculosis (TB) Vaccine Expected to be Ready by 2020
A new TB vaccine could be ready by 2020.The current tools are not enough to control tuberculosis ......