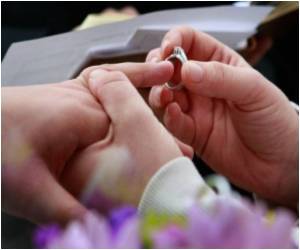 Two chemicals produced in the brain have a major say on whether we stick with the same partner for a long period of time or seek novelty every so often.

One of the world's leading anthropologists, Dr Helen Fisher has studied on the subject of romantic love for more than three decades. Dr Fisher says that the attraction with a partner will largely depend on the chemistry of a person's personality with the partner.

According to Dr Fisher, personality can be broadly classified into four types, explorers, builders, directors and negotiators, which are largely dependent on two of the brain's chemicals, dopamine and serotonin, along with testosterone and oestrogen.


If serotonin is the dominant chemical, then the personality of a person can be classified as "builders" and such people are calm and are loyal to their partners. The domination of dopamine is the exact reverse, with the tendency to seek novelty being the dominant trait of that person's personality.

Divorce can be traumatic for children and create a sense of insecurity amongst them. Couples should realize that joined parenting is important even after divorce.
Advertisement
Oestrogen produces personality traits such as high imagination and very good social skills while people with high levels of testosterone are tough minded and decisive.

"There will always be magic to love, but knowledge is power. If you know who you are, what you seek and how you and others love, you can capture that magic, find and keep real love, and make your dreams come true", Dr Fisher said.

Infidelity is no longer seen as a midlife crisis alone because younger people are beginning to cheat on their spouses
Advertisement
<< Patent Approval for Products of Living Cell Technologies an...
Hospital Kiosks Project in Kerala to Update Parents on Va... >>

More News on:
Parkinsons Disease Parkinsons Disease Surgical Treatment Brain Sexual Intercourse Facts Brain Facts Ataxia Flowers And What They Mean To Us Language Areas in The Brain Ways to Improve your Intelligence Quotient (IQ) Understanding the Role of Love in Mental Health

Iron Intake Calculator Noscaphene (Noscapine) Hearing Loss Calculator Daily Calorie Requirements Vent Forte (Theophylline) Turmeric Powder - Health Benefits, Uses & Side Effects Selfie Addiction Calculator The Essence of Yoga Calculate Ideal Weight for Infants Find a Doctor
This site uses cookies to deliver our services. By using our site, you acknowledge that you have read and understand our Cookie Policy, Privacy Policy, and our Terms of Use