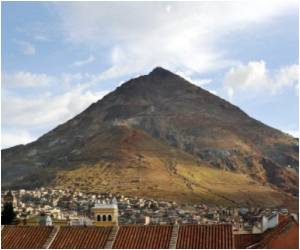 Bolivia's Potosi, one of the highest cities in the world, is now added in the United Nations' list of endangered World Heritage sites due to "uncontrolled mining operations".

UNESCO's annual World Heritage Committee gathering, which takes place this year in Doha, ruled that the colonial city once considered the world's largest industrial complex was at risk of being degraded by mining activity in the Cerro Rico mountain that looms over Potosi.

In central Indonesia where lush rainforest once stood, illegal miners on the frontline of a modern-day gold rush tear up the earth in the hunt for the precious metal.
Advertisement

The so-called "mountain that eats men" holds one of the world's greatest silver deposits, but is at risk of collapse after five centuries of rampant mining that has killed an estimated eight million workers.


Potosi itself is a historic symbol of wealth as it was once South America's richest city due to the silver mine discovered in the 16th century, and was named a World Heritage site in 1987.

The risk of a major depression is high among people who live in areas with destructive environmental effects of mountaintop coal mining, a new study reveals.
Advertisement
The committee on Tuesday cited "potential degradation of the historic site by the mining operations, instability and risk of collapse of the Cerro Rico, deficiencies in conservation and inefficient enforcement of protective legislation" as reasons behind its decision.

But it decided against putting London's Palace of Westminster on the list of endangered sites, despite concern over surrounding skyscraper developments that may block views to and from the site on the bank of the River Thames.

UNESCO delegates are meeting for 10 days in Doha to consider the inscription of 40 sites on the World Heritage List, but also to issue warnings over already-listed locations that may be in danger.

Among the sites expected to win the coveted status are Qhapaq Nan -- a huge network of roads spanning six countries once used by the Inca Empire -- and the Chauvet-Pont-d'Arc Cave in France, which contains some of the earliest known cave paintings.

Silicosis is a lung disease caused by inhalation of crystalline free silica dust. It is characterised by nodular pulmonary fibrosis.
Advertisement
<< Hand Shiatsu Explored as a Sleep Aid by Pain Pilot
Gran Gives The Gift Of Life To Granddaughter In UK >>