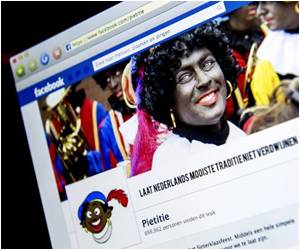 The traditional holiday arrival of Saint Nicholas was watched by tens of thousands of people in Amsterdam's streets as a handful joined a silent protest against his sidekick "Black Pete", which they said was a racist symbol.

The debate over Black Pete has reached a fever pitch in the last weeks in the Netherlands, highlighting the issue of racism in a country that prides itself on open-minded values. It has even sparked a UN rights probe.

Two months ago 21 Dutch citizens filed complaints against Black Pete's presence at the annual Saint Nicholas arrival festival, a move that has split opinion in the country of 16.7 million people.


The complainants, many of whom are descendants of people from former Dutch colonies like Suriname and Curacao, asked Amsterdam mayor Eberhard van der Laan to pull the permit for the festival because of Black Pete's presence.
Advertisement
Their request was turned down and on Sunday demonstrators taped their mouths and turned their backs as thousands of spectators cheered Saint Nicholas' arrival in the city centre, accompanied by hundreds of Black Petes.

"Black Pete reminds us of a time when black people were enslaved. It's not appropriate in 2013," said one of the protesters, Kenneth Brammerloo, 52, wearing a T-shirt depicting Black Pete's face with a "no-entry" sign over it.

"The only way to tell people that Black Pete is a racist caricature is to educate them about it," Roelof-Jan Minneboo, one of the organisers, told AFP, adding that there were demonstrations being staged at various spots in the city.

At its famous Dam Square, around 75 demonstrators, many wearing anti-Black Pete T-shirts, turned their backs in silent protest as Saint Nick and his helpers passed by.

The invention of a Dutch school teacher, Black Pete has since 1850 been loyally at the side of Saint Nicholas, the Dutch version of Santa Claus or Father Christmas.

Saint Nicholas and his helpers traditionally "arrive" with a gift-filled boat from Spain on the third weekend of November.

Three weeks later, on December 5, the Dutch give each other gifts said to have been distributed by Saint Nicholas -- a Turkish bishop wearing a long red gown and mitre -- and Black Pete.

Dressed in a gaudy medieval costume, with a blackened face, red lips and an afro wig, Pete is seen by many ordinary Dutch as a harmless prankster cheering up a children's festival.

Opponents however say the character recalls the time when Dutch colonists exploited slaves, notably in the Caribbean colonies of Suriname and Curacao.

While many festivalgoers on Sunday said they disagreed with the protest, they believed there should be a debate about the issue of Black Pete.

"But ultimately, it must remain just what it was intended for -- a children's festival," added Dennis Wierenga, 42, who brought his two boys, aged two and four, to watch Saint Nicholas' arrival.

"The protest is totally ridiculous," said another woman, 72, who declined to give her name. "The whole of the Netherlands are against these people."

Although the debate surfaces every year, the row is particularly bitter this year after the Jamaican chair of a committee at the UN High Commissioner for Human Rights, Verene Shepherd, bluntly told Dutch television that "the practice must stop".

Amsterdam Gears Up for Arrival of Saint Nicholas and Black Pete
Despite objections that 'Black Pete' is a racist symbol, Amsterdam is gearing up for the ......

Black Pete Furor Continues to Rumble on
In a country proud of its open-minded values, a passionate debate around Black Pete in the ......