Amsterdam Gears Up for Arrival of Saint Nicholas and Black Pete 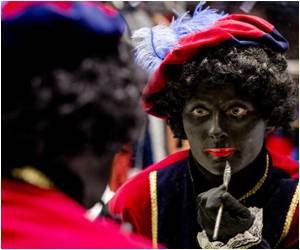 Despite objections that 'Black Pete' is a racist symbol, Amsterdam is gearing up for the traditional arrival of Saint Nicholas and his jolly sidekick next month.

"The permit allowing Saint Nicholas' arrival in Amsterdam will not be revoked," the capital's mayor Eberhard van der Laan said in a letter.


The complainants, many of whom are descendants from former Dutch colonies like Suriname and Curacao, asked Van der Laan to pull the permit for the festival planned for November 17 because of Black Pete's presence.
Advertisement
Saint Nicholas and his helpers traditionally "arrive" with a gift-filled boat from Spain on the third weekend of November.

Three weeks later, on December 5, the Dutch give each other gifts said to have been distributed by Saint Nicholas -- a Turkish bishop wearing a long red gown and mitre -- and Black Pete.

Dressed in a gaudy medieval costume, with a blackened face, red lips and an afro wig, Pete is seen by many ordinary Dutch as a harmless prankster cheering up a children's festival.

Opponents however say the character recalls the time when Dutch colonists exploited slaves, notably in the Caribbean colonies of Suriname and Curacao.

Although the debate surfaces every year, this year the row is particularly bitter after the Jamaican chair of a committee at the UN High Commissioner for Human Rights, Verene Shepherd, bluntly told Dutch television that "the practice must stop".

But Van der Laan said in his letter that "Saint Nicholas is a traditional children's festival".

The mayor added that he continued talks with Black Pete's detractors as well as the event's organisers.

"Although there's mutual empathy from both sides and the discussion over Black Pete continues... as far as I know until now no solution has been found," Van der Laan said.

The annual festival dates back to the sixteenth century, but Black Pete first appeared in the 1850s.