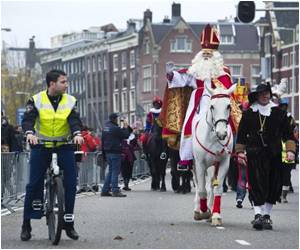 Dutch court ruled on Thursday ordering the capital's mayor to review a traditional children's festival because of "Black Pete". Black Pete, the jolly sidekick of the Dutch Saint Nicholas is a negative stereotype, an Amsterdam court ruled.

"The image of Black Pete with his thick red lips, being a stupid servant, gives rise to a negative stereotyping of black people," the regional court said in a statement.

Love your black tea too much? We give you many reasons to switch it for herbal tea. Read on to know more...
Advertisement


Emotions reached fever pitch last year ahead of the 75th annual "arrival" of the Saint Nicholas and his controversial helper in Amsterdam at a traditional holiday celebrated by children around the Netherlands.

Antioxidants in the form of small berries packed with wonderful benefits...Find out how these tiny berries work to make you feel and look beautiful.
Advertisement
Saint Nicholas and dozens of Black Petes traditionally "arrive" with a gift-filled boat from Spain on the third Saturday of November.

Three weeks later, on December 5, the Dutch give each other gifts allegedly distributed by Saint Nicholas -- a Turkish bishop wearing a long red gown and mitre -- and Black Pete.

Dressed in a gaudy medieval costume with a blackened face, red lips and an afro wig, Pete is seen by many ordinary Dutch as a harmless prankster cheering up the children's festival.

But his detractors say he's a racist throwback to an era when black people were enslaved by the seafaring Dutch in their far-flung colonies, particularly Suriname and Curacao.

The issue of Black Pete has even sparked a UN rights probe.

The arrival of Saint Nicholas and Black Pete went ahead in Amsterdam on November 17, but 21 residents took mayor Eberhard van der Laan to court over his decision to allow the event.

"The Mayor now has six weeks to review his decision in allowing the festival to go ahead," said the court.

Mayor Van der Laan over the last years "facilitated the social debate around Black Pete," the City of Amsterdam said in a statement.

"Looking at the objections of some of Amsterdam's residents, it will be good to ring in changes to the tradition," it said.

"But one also need to take into consideration those for whom Black Pete is an important part of the tradition," it pointed out, saying changes will be gradual.

Van der Laan resumed discussions on the Black Pete issue in March and will continue to do so ahead of the 2014 Saint Nicholas celebrations.

"The Mayor hopes on a harmonious outcome," the city's statement added.

The court's verdict is the start of "an essential change in our society", he said.

Prejudice can Lead to Depression

A study has helped to identify that stereotyping can result in prejudice and this can, in turn, cause depression.
Advertisement
<< Ban of Wine in Offices by Employers is Allowed in France
Motorhead Fan's Brain Bleeds From Headbanging >>