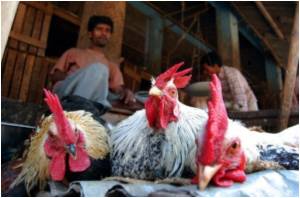 Confirmations of outbreak of Bird-flu infections by officials at a poultry farm in the south resulted in the slaughter of some 112,000 chickens in Japan.

DNA tests confirmed the H5 strain of the virus at a farm in Kumamoto prefecture that kept 56,000 birds, after its owner reported Saturday a lot of sudden deaths among his poultry, the agriculture ministry said in a statement.

Officials also ordered the culling of another 56,000 birds at a separate farm run by the same owner after treating it as a location of possible infections, the ministry said.


It was the first confirmed outbreak of bird flu in Japan in three years.

The ministry has however been warning farmers about infection risks, citing the continued spread of the disease in Asia, including neighbouring South Korea.
Advertisement
Local authorities on Saturday banned movement of chickens from the two affected farms as well as other farms in their vicinities.

Authorities were sanitising areas around the two farms and testing birds at other area farms.

Officials were also setting up areas to disinfect vehicles travelling on major roads around the affected farms to prevent the virus from spreading further.

The government will dispatch a team of officials and experts to identify the cause of the latest infections and to assist local authorities to take necessary measures.

Bird-flu Surge Being Fought By Cambodia
Cambodia is battling a spike in the better known H5N1 strain that is baffling experts a decade ......