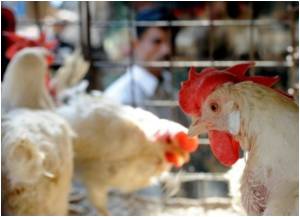 A UN agency said on Thursday that it will take at least 10 years to eradicate the H5N1 bird flu virus, which has killed scores of humans, from poultry in the six countries where it is endemic.

The strain of the avian influenza virus was reported in 60 countries at its peak in 2006 but most had managed to stamp it out, the Food and Agriculture Organisation said in a report.

It however remained "firmly entrenched" in Bangladesh, China, Egypt, India, Indonesia and Vietnam, including because of the nature of their production and market chains, and quality of veterinary services, it said.


Another factor was that in these countries "fear of H5N1 does not necessarily translate into concrete plans for virus control and elimination," the report said.

It might not be the plague yet, but the bird or avian flu scare has acquired this nasty habit of sending a shiver down the spine.
Advertisement
The H5N1 strain of avian influenza has killed around 320 people worldwide since 2003.

"Eliminating the highly pathogenic H5N1 avian influenza virus from poultry in the six countries where it remains endemic will take 10 or more years," the agency said in a statement.

It made recommendations for each country regarding measures they should take over the next five years to enable them to eliminate the virus.

"They contain a mix of measures aimed at outbreak control and response, gathering and analysing information, and disease prevention and risk reduction," it said.

Swine flu, a type of influenza caused by a new strain of the H1N1 Type A influenza virus has originated from the pigs. Winter always brings along the chills and the flu, make sure you're safe this season.
Advertisement
<< Artemisinin Preferred to Quinine in Malaria Treatment: WHO
Indian-Origin US Student Faces Five Years in Prison for Roo... >>

The Essence of Yoga Hearing Loss Calculator Diaphragmatic Hernia A-Z Drug Brands in India Accident and Trauma Care Color Blindness Calculator Sinopril (2mg) (Lacidipine) Blood Donation - Recipients Iron Intake Calculator Find a Hospital
This site uses cookies to deliver our services. By using our site, you acknowledge that you have read and understand our Cookie Policy, Privacy Policy, and our Terms of Use