Belgians Count the Cost of Cup Woes With Unhappy Campers 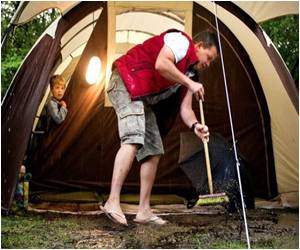 Belgian fans were looking forward to a "luxury camping" trip to the World Cup in Brazil, but got a muddy mess which was far from five-star treatment.

Around 500 people paid around 150 euros ($200) a night per person -- all for the privilege of sleeping in tents that lack electricity and the promised wi-fi connection.

The tourists at the "Belgian Village" at Recreio dos Bandeirantes, a coastal resort some 40 kilometers (25 miles) west of Rio de Janeiro, have also had to contend with dirty showers and toilets.

"We are really very disappointed, considering what we have shelled out. It's not at all how they told us it would be," he said.
Advertisement
Replete with advertising billboards, the campsite usually hosts Brazilian surfers -- but the owners scrambled to make changes for the Belgian visitors.

To make matters worse, the campers have had to cope with torrential rain -- the type of weather from back home that they had sought to escape.

To visit Rio tourist havens such as Sugarloaf Mountain or Copacabana beach, they endure at least an hour on the bus each way, and longer in rush hour traffic.

"Look, there's our 'luxury tent'," grumbled Gilsoul, who was camping with his Venezuelan wife, as he opened up the entrance to a basic repose the size of a small bungalow.

Their bed was made of two wooden structures covered with a thin mattress. There were no cupboards and a pocket lamp served as lighting.

"The toilets are dreadful -- pretty unsanitary. The wi-fi doesn't work, they serve us up stale Dutch cheese. The staff only speak Dutch and English. It's my first and last World Cup," said Gilsoul, who lives on the French Indian Ocean island of Reunion.

The couple paid 9,000 euros ($12,000) for their trip, organized by travel agency Sun Riezen, an official partner of the Belgian Football Union. The sum included Brussels flights and transfers to the three cities where Belgium's Red Devils have group matches.

The price includes half-board at the site some have dubbed "Devillage" -- a play on words for devil and village.

The promotional literature promises "an unforgettable trip" with entertainment thrown in as well as "free wi-fi connection," all allowing visitors to "share the Brazilian experience."

"We are all very unhappy -- we've been stressed out for three days. We don't even talk about the football anymore," said psychiatric nurse Jean-Francois Claes.

"We are very disappointed with the football federation ... who drop their fans 10,000 kilometers from home," added Claes, saying that there was little sign of "the dream camp they sold us."

The campers say complaints to the federation have been directed to the Dutch firm running the site. Their officials declined to comment to AFP.

To try to head off the growing discontent, the Dutch operator and the football union have agreed to knock 50 euros per day per head off the price.

That decision came after a stormy meeting Thursday when organizers tried to soothe the unhappy campers by offering two hours of free beer, a bus ticket to Copacabana and a cut in beer prices for the remainder of the trip from 2.50 to 2.25 euros.

Despite the problems, Pascal van Cauwenberge, a 54-year-old accountant, said: "We're happy to be here even so. We've seen and tasted the magic of a Brazilian stadium -- it was exceptional."

Just beyond the site, eight Argentines in their 40s sat laughing as they sipped their mate infusions next to a 1966 vintage Mercedes van, which they drove all the way to Brazil to see Lionel Messi and company.

"We had to take holidays and get permission from our wives, who'll make us pay for that all our lives. But it's great," said Jose Vega.

The Argentine group said they can't complain too much about their camping conditions.

Canned Beer is Always Better Than Their Bottled Counterparts
Be it camping or on a hike, canned beers are always better than bottled ones especially when you ......

Camping Out can Help Reset Clock That Governs Sleeping Patterns
A new study reveals that camping out for one week can help reset the biological clock that governs ....