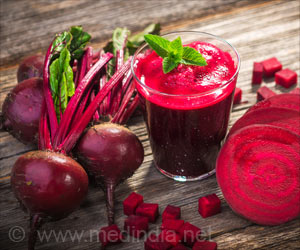 Betanin compound present in beetroot which gives the vegetable the distinct red color could help slow the accumulation of misfolded proteins in the brain, a process that is associated with Alzheimer's disease, revealed scientists.

The findings showed that the compound betanin in beetroot extract could eventually help "Our data suggest that betanin shows some promise as an inhibitor of certain chemical reactions in the brain that are involved in the progression of Alzheimer's disease," said Li-June Ming, from the University of South Florida.

Beta-amyloid is a sticky protein fragment, or peptide, that accumulates in the brain, disrupting communication between brain cells called neurons.


Much of the damage occurs, when beta-amyloid attaches itself to metals such as iron or copper. These metals can cause beta-amyloid peptides to misfold and bind together in clumps that can promote inflammation and oxidation -- a process similar to rusting -- in nearby neurons, eventually killing them.
Advertisement
Betanin is also used in commercial dyes that readily binds to metals. The team investigated betanin's potential to block the effects of copper on beta-amyloid and, in turn, prevent the misfolding of these peptides and the oxidation of neurons. When betanin was added to the copper-bound beta-amyloid mixture, the researchers found oxidation dropped by as much as 90 per cent, suggesting that misfolding of the peptides was potentially suppressed.

"We can't say that betanin stops the misfolding completely, but we can say that it reduces oxidation," noted Darrell Cole Cerrato from the varsity. "Less oxidation could prevent misfolding to a certain degree, perhaps even to the point that it slows the aggregation of beta-amyloid peptides, which is believed to be the ultimate cause of Alzheimer's," Cerrato explained. The results were presented at the 255th National Meeting & Exposition of the American Chemical Society in New Orleans.