Bedbugs Have Developed Resistance To Most Common Pesticides 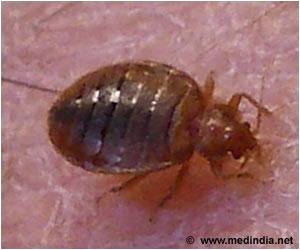 Commercial chemicals that are widely available in the market to kill bedbugs are ineffective as the pests have built up a tolerance to them, according to a team of researchers from Virginia Tech and New Mexico State University.

Millions of dollars have been spent on insecticides to kill the bugs that have wreaked havoc on everything from hotels in New York City to homes in Los Angeles. But this is the first study to show that overuse of certain insecticides has instead led to an increased resistance to the compounds, making them much less effective than advertised.

On the agenda at a major scientific meeting is the bedbug's most closely guarded secrets.
Advertisement
‘When bedbugs are exposed to insecticides, they produce detoxifying enzymes strong enough to withstand chemicals created to eliminate them. ’

"While we all want a powerful tool to fight bedbug infestations, what we are using is not working like it was designed to do anymore and people are spending a lot of money on tools that aren't effective," said Troy Anderson, an assistant professor of entomology in the Virginia Tech College of Agriculture and Life Sciences.


Anderson and Alvaro Romero, an assistant professor of entomology at New Mexico State University, published their findings in the Journal of Medical Entomology.

The Big Apple Shares Space With the Bedbugs This Summer

The city that never sleeps? Tell that to New York's bedbugs. The tiny blood suckers specialize in feeding off sleeping bodies and this summer in the Big Apple they're enjoying the
Advertisement
The two examined the class of insecticides called neonicotinoids, or neonics, which is often paired with pyrethroids in commercial applications to treat bedbugs.

"Companies need to be vigilant for hints of declining performance of products that contain neonicotinoids," Romero said. "For example, bedbugs persisting on previously treated surfaces might be an indication of resistance."

The researchers conducted their study by comparing bedbugs from homes in Cincinnati and Michigan that had been exposed to neonics with a colony that a researcher has kept isolated since before the insecticide was used. For the last 30 years, the colony has been in an isolated lab run by Harold Harlan with the Armed Forces Pest Management Board.

They also examined a pyrethroid-resistant population from New Jersey that had not been exposed to neonics since they were collected in 2008.

The bedbugs from Harlan''s lab that never have been exposed to neonics died when they were exposed to a very small amount of the insecticide. The New Jersey bedbugs fared slightly better, showing moderate resistance to four different types of neonics.

But the bedbugs from Michigan and Cincinnati, which were collected after combinations of insecticides were introduced to the U.S., had much higher levels of resistance to neonics.

The researchers believe that the detection of neonicotinoid resistance in the New Jersey bedbugs, which were collected before the widespread use of neonics, could be due to pre-existing resistance mechanisms.

When exposed to insecticides, bedbugs produce "detoxifying enzymes" to counter them, and the researchers found that the levels of detoxifying enzymes in the New Jersey bedbugs were higher than those of the susceptible Harlan population.

"Unfortunately, the insecticides we were hoping would help solve some of our bed bug problems are no longer as effective as they used to be, so we need to reevaluate some of our strategies for fighting them," said Anderson, who is also a researcher at the Fralin Life Science Institute.

"If resistance is detected, products with different modes of action need to be considered, along with the use of non-chemical methods," said Romero.

If you are wondering whether the bloodsucking bedbugs could get any creepier, the answer is yes.
Advertisement
<< Are Cold Weather Blues Real or a Myth?
Go for Red to Promote Heart Disease Awareness Month in the U... >>

Typically inbreeding induces genetic defects that eventually kill creatures engaging in it, but it not so with bedbugs which thrive by mating with relatives, researchers said on Tuesday.

The Essence of Yoga Accident and Trauma Care Find a Doctor A-Z Drug Brands in India Iron Intake Calculator Sanatogen Calculate Ideal Weight for Infants Indian Medical Journals Drug Side Effects Calculator Noscaphene (Noscapine)
This site uses cookies to deliver our services. By using our site, you acknowledge that you have read and understand our Cookie Policy, Privacy Policy, and our Terms of Use