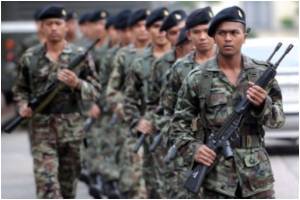 A wary Bangkok is slowly waking up to a new day following a night-time curfew that was imposed by the military as part of the coup carried out on its democratic government.

The capital's usual morning gridlock was relieved as schools were shuttered following an army order, but many people returned to work as normal, stopping at food stalls which opened following the end of the curfew at 5:00 am (2200 GMT Thursday).

In contrast to the last coup in 2006, there were no tanks on the streets and only a limited deployment of soldiers at key buildings.


The direct impact has been felt by senior politicians who were ordered to report to the military. But for the public at large, the curfew was met with a very Thai dose of humour and stoicism in a city whose recent history has been pock-marked by political unrest.
Advertisement
For Thanakan Chalaemprasead the most distressing aspects of the coup so far are the loss of his favourite television shows -- after the army ordered the suspension of normal programming -- and the early closure of the city's ubiquitous 7/11 stores.

"I was hungry but I only had instant noodles at home," the 21-year-old mechanic said.

"There was also nothing on television if the army wants us to stay home, they should have at least let us watch something."

Instead, televisions and radios blared patriotic music punctuated by statements from a stern-faced military spokesman.

Overnight the commercial heart of the city, famed among foreign holidaymakers for its 24-hour beat, was reduced to a near ghost town, with only the occasional tuk-tuk or taxi plying the roads as the curfew descended.

A smattering of bars breached the order serving beers to bemused tourists, most of whom were holed up in their hotels.

But there were few direct signs of the military intervention, after a dramatic day of army deployments and televised orders threating further curbs on media and personal freedoms -- including a ban on political gatherings of more than five people.

As dawn broke Friday scores of armed troops were seen around Government House overseeing a clean-up after protesters dispersed from their sand-bagged encampment.

An AFP reporter saw army officers giving alms to Buddhist monks outside a nearby temple, which is in the city's historic heart, as a bulldozer removed sand-bags and concrete blocks from the vacated protest site.

After months of disruptive political rallies, some Bangkok residents expressed optimism that the coup would cut a path through the political paralysis, which has seen at least 28 people killed and hundreds more wounded in violence linked to the protests.

"At first I thought the coup was a bad idea," Vichit Kriyasaun, 27, told AFP. "But now I think it could be good because they may stop the fighting," he said.

However, others were further wearied by the latest chapter in a festering political crisis that has torn Thailand apart since 2006, when billionaire former premier Thaksin Shinawatra was ousted by the military.

The overnight curfew is expected to remain in place nationwide until the army says otherwise.

"This curfew is no good we have no customers, the tourists are scared," said Wanit, a 50-year-old taxi driver giving only one name.

"The army can do anything now and the people will not know."

Source: AFP
Advertisement
<< Health Professionals Should be Alert to Detect Rarer Causes...
Health Care for Hispanics is the Future of Health Care in A... >>