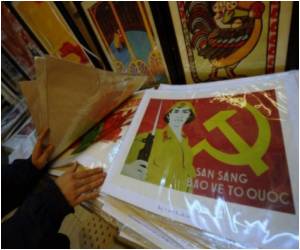 The number of guests is limited to 600 for both families and expensive venues such as five-star hotels should be avoided, according to a notice on the Hanoi city's official website seen on Monday.

'Great Step for Equality' as Gay Weddings Come to US Capital

Amid heavy security and without many of the trappings of a traditional wedding, three gay couples were married Tuesday in a ceremony in Washington on the first day same-sex marriages
Advertisement

Lavish weddings organised by party members have "caused anger among the public and badly hurt the personal prestige of party members", it said.


Vietnam's authoritarian government, which has launched an anti-corruption campaign in recent months, is struggling to contain growing public discontent over a weak economy and a string of scandals involving high-level officials.

As the biggest royal occasion in 30 years nears, Britain is making final preparations for the wedding of Prince William and Kate Middleton next week.
Advertisement
Opulent wedding parties are common in Vietnam, with the guest list usually stretching to about 1,000 people. Some party members questioned whether the authorities would be able to enforce the new rules.

"Vietnamese authorities are very good at proposing laws but whether the laws are applied and strictly obeyed is a different story," said a 43-year-old party member in Hanoi who did not want to be named.