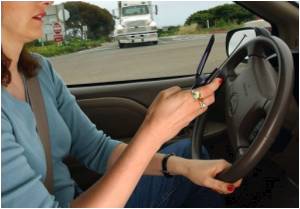 Australia plans to strictly enforce ban all mobile phone use while driving, according to state ministers.

The decision emerged after a landmark report found that even hands-free devices dramatically increased the risk of crashing, reports the Sydney Morning Herald.

The report by state transport heads reflects the growing concern about distraction to drivers involved in accidents.


It found: "Mobile phone use produces a significant increase in casualty crash risk, regardless of whether the phone is hand-held or hands-free."

Head injury or traumatic brain injury is a leading cause of disability among children and young adults that leads to varying degrees of physical and mental stability. Fortunately, it is also one of the preventable brain disorder.
Advertisement
The draft national road safety report comes amid a dramatic rise in the number of people fined for using a phone when behind the wheel, which has become one of the fastest-growing driving offences in the state.

Last financial year almost 50,000 drivers were fined more than 11 million dollars for calling, texting, reaching, even touching their phone while driving - more than double the number fined six years ago.

The aim is to reduce annual road deaths by 30 per cent during the next decade.

"There is evidence to support bans on all mobile phone use while driving," the draft, which federal and state ministers are reviewing, stated.

The federal parliamentary secretary for infrastructure and transport, Catherine King, said on average 1500 people died on Australian roads each year.