Austerity Bites Cause Europeans To Give Up Holiday Travels 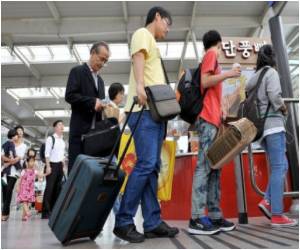 Fewer Europeans are planning to go away for a summer holiday as economic austerity bites, a new study shows, with levels of foreign vacation travel at their lowest for eight years.

No more than 54 percent of Europeans are planning to get away for summer holiday this year, according to the Ipsos-Europ Assistance "holiday barometer" published Thursday.

Europ Assistance Group CEO Martin Vial said there was "a clear correlation between the intensity of the slump and holiday intentions".


Unsurprisingly the countries with the highest unemployment rates were the worst hit.

"The scope of the crisis in Spain and Italy is particularly visible in departure plans," the report said, with fewer than one in two Spaniards planning to leave on holiday this summer and little more than half of Italians.
Advertisement
Due to "less tense" economic and social situations the departure plans for Germans and Austrians had stabilised, according to the study.

For the first time since the economic crisis began, the French are particularly affected this year, it said.

While 62 percent of them say they want to leave on holiday this year, this is still eight points down on last year and the lowest rate since 2005.

At least the stay-at-home French can comfort themselves on remaining in the leading destination chosen by Europeans.

The country is set this year to welcome 18 percent of European tourists, the study says, followed closely by Italy with Spain, on 14 percent, in third place.

The Internet and social networks are being used more than ever for vacation preparations, with the British holidaymakers most active on the Internet, followed by the Belgians, French and Germans.

The British have also retained their enthusiasm for foreign travel, being the only country studied where the intentions to leave on a summer holiday are going up this year, from 51 percent to 56 percent.

Ipsos conducted the study talking to a total of 4,048 Europeans from Austria, Belgium, Britain, France, Germany, Italy and Spain.

Source: AFP
Advertisement
<< Heart Patients in Bengal can Use Novel Financial Scheme
New Research into Treatment for Neglected Diseases on the W... >>

A 445,000 Pound Holiday
Travellers now get a chance to visit every World Heritage Site in the world, all thanks to a ......

Study: More Than 50pc Brits Check Work Emails on Holidays for Fear of Losing Job
51 per cent of people in Britain check work emails every day while on holiday and as many as 38 per ...