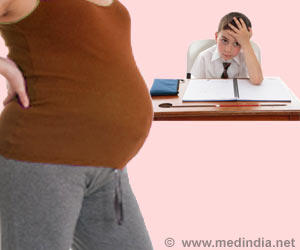 Flame retardants are compounds added to materials such as textiles, plastics, wiring and furniture containing polyurethane foam to prevent the spread of fire. They are called polybrominated diphenyl ethers (PBDEs). Since PBDEs are not chemically bound to materials, they migrate into the environment over time.

Humans are commonly exposed to the PBDEs through accidental ingestion of house dust and by eating meat, dairy, and fatty fish with accumulated chemicals. Prenatal exposure to certain common flame retardants may contribute to attention problem in young children, revealed a new research. The study findings highlight the effects of prenatal exposure to PBDEs on children's development during both preschool and school age periods.

Traumatic brain injury that could be caused by a fall, traffic accident, assault or sports injury, slows down the processing speed in children.
Advertisement

Study senior author Julie Herbstman, assistant professor of environmental health sciences at Columbia University's Mailman School of Public Health, said, "These findings support the need to develop programs for safely disposing of products containing PBDEs that are still in use."

Kids who were exposed to organophosphate pesticides while still in mother's womb are more likely to develop attention disorders later in life, a new study has found.
Advertisement
Umbilical cord blood samples were analyzed for PBDEs to assess prenatal exposure to the chemicals.

At ages three, four and seven years, children with the highest exposure to some PBDEs were observed to have approximately twice the number of maternally-reported attention problems compared to other children in the study.

The results appeared in the Neurotoxicology and Teratology.

A new study has pointed out that both viewing television and playing video games can cause attention problems in children.
Advertisement
<< Medecins Sans Frontieres Calls For Cautious Approach On EU-I...
Nobel-Winning Chemistry Research Could Improve Effectivenes... >>

More News on:
Height and Weight-Kids Pregnancy and Antenatal Care

Calculate Ideal Weight for Infants Turmeric Powder - Health Benefits, Uses & Side Effects Find a Doctor Drug Side Effects Calculator Pregnancy Confirmation Calculator Drug - Food Interactions Post-Nasal Drip The Essence of Yoga Indian Medical Journals Selfie Addiction Calculator
This site uses cookies to deliver our services. By using our site, you acknowledge that you have read and understand our Cookie Policy, Privacy Policy, and our Terms of Use