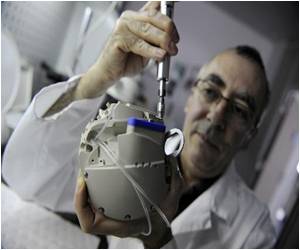 The efforts to create thinking machines pose a threat to our very existence, reveals Stephen Hawking.

The theoretical physicist told the BBC in response to a question about a revamp of the technology he uses to communicate, which involves a basic form of AI, that development of full artificial intelligence could spell the end of the human race.
Advertisement

The author of 'A Brief History of Time' said that the primitive forms of artificial intelligence developed so far have already proved very useful, but he fears the consequences of creating something that can match or surpass humans, as it would take off on its own, and re-design itself at an ever increasing rate.


Hawking added that he believes that people will remain in charge of the technology for a decently long time and the potential of it to solve many of the world problems will be realized.

Source: ANI
Advertisement
<< Many Chest X-Rays in Children Offer No Clinical Benefit
Knee Surgery may Lead to Arthritis and Cartilage Loss in So... >>

Improved Bomb-Sniffing Technology
A new type of carbon nanotube material for handheld sensors has been developed that will be quicker ...

Delivery of Therapeutics to the Brain may be Facilitated by New Technology
An article sheds light on a new technology that may assist in the treatment of brain cancer and ......