Around the World in 188 Days: The Electric Car Has Arrived! 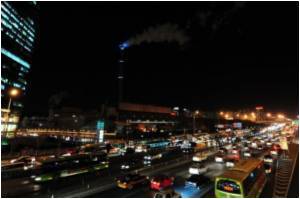 Electric vehicles from Australia, Germany and Switzerland completed a pioneering 27,000 kilometre "emissions free" round-the-world trip on Thursday, after 188 days on the road and at sea.

The three-wheeler dubbed "TREV" from Adelaide, a German electric scooter and a "Monotracer" high-tech motorcycle glided silently into the UN's European headquarters about six months after they headed eastwards around the world.

Get the Electric Car That Beats Traffic Jams and Parks Itself

Tired of traffic jams and lack of parking spaces? Well, there is good news for you, as scientists have designed an electric car that beats traffic congestion and parks itself.
Advertisement

Organiser Louis Palmer, a Swiss schoolteacher who made headlines with his 18-month pioneering world tour in a solar-powered "taxi" three years ago, said the three experimental vehicles spent 80 days on the road.


"We wanted to show to the people of the world that we want this change, we all want these electric cars," he said.

According to a new vision of the future set out today, stackable electric cars and 'telepresence' screens are just one generation away.
Advertisement
The UN-backed "Zero Race" stopped off at the World Climate Conference in Cancun, Mexico last December, after touring through Europe, Russia, China, Canada and the United States, before heading back through Morocco and Spain about a month behind schedule.

"This shows what we are trying to preach, that it can be done. Cars powered by clean renewable energy can be as effective as petrol-driven vehicles but without emissions," said Sylvie Motard of the UN Environment Programme (UNEP).

However, the crews admitted they sometimes had trouble charging the vehicles even if they avoided major breakdowns.

"It was very hard in some places, certainly for our team members in Russia China," said Alexandra James, one of the 12 volunteers who took their turn driving the bright green Australian two-seater TREV.

"They were wiring straight into the power supply in certain situations because it was the only way to get a reliable power source -- it was a challenge," James, a manager at the South Australia Technology Industry Association, told AFP.

"We had to visit a lot of interesting places -- the fire stations have been fantastic."

With some grid supplies on their way potentially being generated by high carbon sources such as coal, each team bought as much power as they consumed from renewable sources such as wind, solar and hydroelectric power, to claim an emissions-free tour.

A new research has pointed out that electric cars may help in reducing emissions and be good for the environment.
Advertisement
<< Dieticians Must Help Patients Create Action Plans
'Surrogate Baby Ring' Busted By Thai Police; Women Freed >>

Hearing Loss Calculator The Essence of Yoga Accident and Trauma Care Sanatogen Post-Nasal Drip Color Blindness Calculator Drug - Food Interactions Selfie Addiction Calculator Indian Medical Journals Daily Calorie Requirements
This site uses cookies to deliver our services.By using our site, you acknowledge that you have read and understand our Cookie Policy, Privacy Policy, and our Terms of Use  Ok, Got it. Close
×

Around the World in 188 Days: The Electric Car Has Arrived! Personalised Printable Document (PDF)