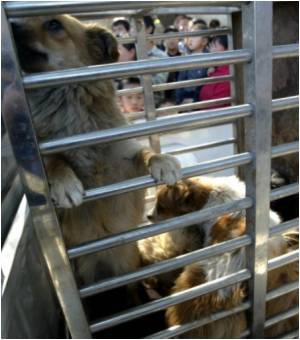 Animal-rights activists rescued hundreds of dogs that were being trucked to Chinese restaurants for a culinary fate. A truck crammed with the dogs was forced to stop Friday on a highway in eastern Beijing by a motorist who swerved his car in front of the truck and then used his microblog to alert animal-rights activists, reports said.

The dogs, many apparently stolen from their owners, were being transported from the central Chinese province of Henan to restaurants in Jilin province in the northeast, the China Daily said. It said 430 dogs were rescued, while the Global Times put the number at 520.

Eventually, about 200 animal lovers and activists gathered around the truck in eastern Beijing and after a 15-hour standoff that jammed traffic the dogs were freed early Saturday when an animal-protection group purchased them for 115,000 yuan ($17,600), the Global Times said.


The interception of the dogs was the latest bold action by pet-lovers in China, where growing awareness of animal rights is colliding with centuries-old culinary practices.

Eating dog meat, and to a lesser extent cat meat, is common in Asia. In a case-based education article published by PLoS Medicine , Heiman Wertheim (Oxford University
Advertisement
There have been regular reports in recent years of citizens attempting to block trucks carrying hundreds or even thousands of cats to meat markets in southern China, where cat meat is particularly popular.

The China Daily quoted activists saying many of the dogs still had collars with bells and name tags, indicating they had been stolen from their owners and that the trucking company transported a load of dogs to Jilin each week.

The consumption of dog and cat meat, both of which are believed to promote bodily warmth and are thus popular in winter, remains widespread in China despite a surge in popularity as pets.

However, earlier press reports have said authorities were looking into drafting a law that could outlaw the practice.

The reports on the dog rescue suggested the truck company was unlikely to face legal action as it had all the necessary permits to transport the animals.

The healthy dogs were to be made available for adoption in one month while the sick ones, suffering variously from dehydration and infectious diseases, were sent to pet hospitals in Beijing.

Dogs More Likely to Bond With Male Owners Than Women