Analysis Reflects The Effect of Economic Recessions on Population Health

An analysis in CMAJ (Canadian Medical Association Journal) says that contrary to expectations, mortality rates during economic recessions in developed countries decline rather than increase.

In poor countries with less than $5000 GDP per capita, economic growth appears to improve health by increasing access to food, clean water and shelter as well as basic health services.


"In terms of business cycles, mortality is procyclical, meaning it goes up with economic expansions and down with contractions, and not countercyclical (the opposite), as expected," writes Dr. Stephen Bezruchka, from the School of Public Health, University of Washington in Seattle, USA.


Studies of wealthy countries show that greater national wealth does not equate with better health for its citizens. "The United States, with the highest GNP per capita in the world, has a lower life expectancy than nearly all the other rich countries and a few poor ones, despite spending half of the world's health care bill," states the author. It also has the highest poverty levels of any wealthy country, with large health disparities and poor health outcomes.

Countries, such as Sweden, with strong social safety nets and strong labour protection see smaller changes in the health of its citizens during recessions.

Studies show that unemployment can be bad for people's health, yet smoking, excessive alcohol consumption and overeating decline during recessions with beneficial impacts on health. Perhaps even more importantly when unemployment rates soar, people have more time for friends and family (especially children) which results in lower mortality.

The current recession represents opportunities. "If we recognize that economic growth may not be good for our health, then we can consider means of reining in the excess wealth... and of redistributing national resources through social spending for the common good," concludes Dr. Bezruchka. 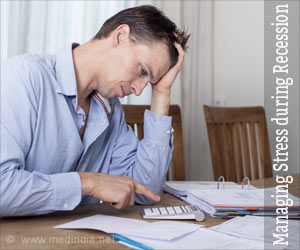 Managing Stress during Economic Recession
It is imperative to manage stress during economic recession. Look at the positive side; it is always followed by economic prosperity. So why worry!
READ MORE