An Eco-Island Created From Plastic Bottles: The Manmade Hawaii 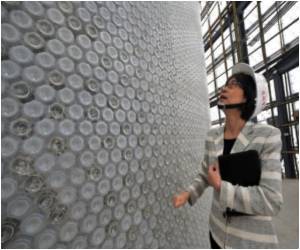 Ambitious as it may sound, a team of Dutch scientists hope to create an island - the size of Hawaii - entirely from 44million kg of plastic waste.

Recycled island, which is part of an environmental vision for the future, will be made from plastic waste currently bobbing around in the Pacific Ocean.

Taiwan has begun converting 1.5 million recycled plastic bottles into a nine-storey building which will be the venue for an international event on the island.
Advertisement

Solar and wave energy will be used to sustain the island and its 500,000 inhabitants who will live in a city similar to Venice, in Italy.


"The proposal has three main aims; cleaning our oceans from a gigantic amount of plastic waster; creating new land; and constructing a sustainable habitat," the Sun quoted a spokesman for the project as saying.

University of York scientists say that it is possible to recycle waste material from discarded televisions to make them useful for medical purposes.
Advertisement
"Recycled island seeks the possibilities to recycle the plastic waste on the spot and to recycle it into a floating entity," he said.

The team plans to recycle plastic on the spot in the North Pacific Gyre into hollow, floating blocks, and they will become the foundation blocks to the 10,000 square kilometre (3,861 square mile) island.

Alongside the modern city, planners hope to create a large area preserved for agriculture. The island will be designed as self-sufficient, providing food and work for the inhabitants.

"Recycled island should be seen as a unique opportunity to create a new floating habitat from scratch, yet at the same time the ocean is cleaned from a huge part of its plastic pollution," the spokesman added.

The Imperial City which is high in the cool hills of eastern Brazil, the tourist hot spot, is now attracting worldwide attention thanks an innovative scheme to recycle human sewage.
Advertisement
Advertisement
This site uses cookies to deliver our services.By using our site, you acknowledge that you have read and understand our Cookie Policy, Privacy Policy, and our Terms of Use  Ok, Got it. Close
×