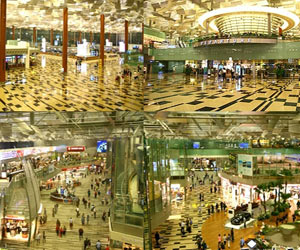 The most important thing that comes after great duty free shopping for air travelers is comfortable areas within the airports to catch a nap.

Sleepinginairports.net, which serves as a guide for budget travelers on where to snooze in airports has listed the world's best and worst airports for this rather crucial inactivity of sleeping.

In a first-of-its-kind move, sleeping pods were introduced by the Abu Dhabi Airports Company at the international airport in the emirate.
Advertisement


The world's best airport for the much needed sleep is the 17th time winner in a row, Singapore's Changi Airport where 'by rule' silence is mandatory in snooze lounge, and there are six rest zones with special reclining deep seats, followed by Seoul's Incheon.

Standing Beside Scanner in Airports Leads to Absorption of More Radiation

People absorb more radiation when they stand beside the scanner than when going through it.
Advertisement
Amsterdam's Schipol Airport scores the top third position for its comfortable couches, a museum and a forest-like area between Departures 3 and 4 complete with nature sounds.

According to the report, the worst airport to feature on the list is Manila Ninoy Aquino International Airport (Terminal 1), where travelers believe sleep is impossible to arrive and even the authorities accept that the airport handles 2 million passengers more than their annual capacity.

Bergamo Orio al Serio Airport (Italy) is ranked second for its sole cafe open for limited hours and travelers complained of anti-social elements screaming and shouting in the premises.

Paris Beauvais Airport scores fifth position as travelers complained of being kicked out at 1p.m as the hotels in the area were full.

For the fourth time in 14 years Singapore's Changi Airport has been named the best in the world at the prestigious World Airport Awards in Geneva.
Advertisement
<< Men's Personality Linked to Number of His Kids
New Breast Implants That can Self Diagnose Problems >>