After Bariatric Surgery, Patients With Diabetes may Need Fewer Medications 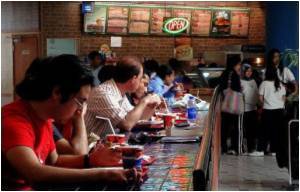 A report in the August issue of Archives of Surgery, one of the JAMA/Archives journals says that bariatric surgery appears to be associated with reduced use of medications and lower health care costs among patients with type 2 diabetes.

"The rapidly growing epidemics of obesity and diabetes threaten to overburden the world's health care systems," the authors write as background information in the article. "From an epidemiological standpoint, once these diseases develop they are rarely reversed. Dietary, pharmaceutical and behavior treatments for obesity are associated with high failure rates, and medical management of diabetes is also often unsuccessful. Despite many efforts to improve the control of glucose levels in diabetes, including clinical guidelines and patient and provider education, less than half of all patients with type 2 diabetes mellitus achieve the American Diabetes Association recommendation of a hemoglobin A1C level of less than 7 percent."


The use of bariatric surgerythat results in long-term weight loss, improved lifestyle and decreased risk of deathhas tripled in the past five years, the authors note. Martin A. Makary, M.D., M.P.H., and colleagues at the Johns Hopkins Bloomberg School of Public Health and The Johns Hopkins University School of Medicine, Baltimore, studied 2,235 U.S. adults (average age 48.4) with type 2 diabetes who underwent bariatric surgery during a four-year period, from 2002 to 2005. They used claims data to measure the use of diabetes medications before and after surgery, along with health care costs per year.

"We observed that independence from diabetes medication was almost immediate within the initial months after surgery and did not correlate with the gradual weight loss expected," the authors write. "This supports the theory that the resolution of diabetes is not due to weight loss alone but is also mediated by gastric hormones, with the three most implicated being peptide YY, glucagonlike peptide and pancreatic polypeptide. As a known mediator of insulin regulation, glucagonlike peptide levels have been noted to increase immediately after bariatric surgery and may explain why surgeons have noted complete resolution of diabetes in some cases within days after surgery."

"Based on these data, we have identified several important implications for health care delivery and public policy," the authors conclude. "Foremost, eligible obese patients should be properly informed of the risks and benefits of bariatric surgery compared with non-surgical health management. Health care providers should consider discussing bariatric surgery in the treatment of obese patients with type 2 diabetes. Health insurers, private and public, should pay for bariatric surgery for appropriate candidates, recognizing a potential annualized cost savings in addition to the benefit to health."