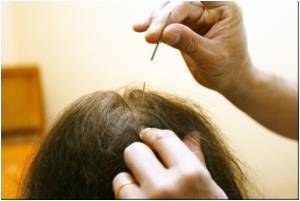 Women suffering from polycystic ovary syndrome (PCOS) may benefit from acupuncture and physical exercise which improve hormone levels and menstrual bleeding pattern, according to a study by University of Gothenburg, Sweden.

PCOS is a common disorder that affects up to 10% of all women of child-bearing age. Women with PCOS frequently have irregular ovulation and menstruation, with many small immature egg follicles in the ovaries. This causes the ovaries to produce more testosterone which, in turn, leads to troublesome hair growth and acne. Obesity, insulin resistance and cardiovascular disease are also widespread among these patients.


In the current study, published in the American Journal of Physiology-Endocrinology and Metabolism, a group of women with PCOS were given acupuncture where the needles were stimulated both manually and with a weak electric current at a DELETE"VERY" low frequency that was, to some extent, similar to muscular work. A second group was instructed to exercise at least three times a week, while a third group acted as controls. All were given information on the importance of regular exercise and a healthy diet. "The study shows that both acupuncture and exercise reduce high levels of testosterone and lead to more regular menstruation," says docent associate professor Elisabet Stener-Victorin, who is responsible for the study. "Of the two treatments, the acupuncture proved more effective."


Although PCOS is a common disorder, researchers do not know exactly what causes it. "However, we've recently demonstrated that women with PCOS have a highly active sympathetic nervous system, the part that isn't controlled by our will, and that both acupuncture and regular exercise reduced levels of activity in this system compared with the control group, which could be an explanation for the results."

Acupuncture
Acupuncture is based on theory of yin and yang, which are not absolute but relative. Yin and yang are the opposites that make the whole.
READ MORE