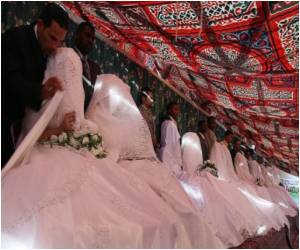 Wesal Jamil was 16 when her family arranged her marriage to a man in his thirties. A decade later, the mother of seven regrets her lost youth.

"My dream was to become a teacher but my marriage deprived me from education and now I have many duties," Jamil told AFP.

Should Women Be Caned? Muslim Nations Call For Debate

An international conference on comparative studies by Muslim nations on whether it is the norm for Muslim women to be caned for an offence under the Shariah law will be held in Malaysia.
Advertisement

"I regret that. Education would have secured me a job to at least help my husband shoulder financial responsibilities," she added.


Jamil is one of thousands of Jordanians under 18 who get married every year after obtaining court permission. In the past two years, 14,000 teenagers have tied the knot, according to court records.

Muslim Women Overcome Shackles for the Sake of Community Health

A group of Muslim women here have broken stereotypes about their community to promote good health and hygiene in their neighbourhood.
Advertisement
The issue stirred up debate in Jordan after proposed amendments to the civil status law in May retained a clause that allows 15-year-old girls to marry.

"Allowing a 15-year-old girl to get married is like legalising rape," said Nadia Shamrukh, head of the Jordanian Women's Union.

The draft amendments had initially kept a civil status law article that allowed any Islamic judge to endorse the marriage of a 15-year-old girl.

But following objections by women's rights activists, further amendments were introduced, requiring that a committee of Islamic judges approve such marriages, "which should take place only in accordance with certain conditions," to be determined by the judges.

Women's groups, who have been pushing for the legal age of marriage for girls firmly set at 18, were disappointed.

"It's not enough. We had hopes that the entire article would be scrapped," Shamrukh said.

"Marriage of girls under 18 should not be allowed unless there are clear and justifiable reasons," said Asma Khader, a former minister and a lawyer who heads the Jordanian National Commission of Women.

In the United States, Europe and other parts of the world, under 18s can marry with parental or judicial consent.

"We receive many complaints about marriage of minors. In one of the cases, a 16-year-old girl got married to an 80-year-old man," said Buthainah Freihat of Jordan's National Centre for Human Rights.

"We feel that some Islamic judges endorse these marriages without making sure that girls are actually ready to get married," she added.

Freihat demanded "clear regulations to deal with this problem and protect the rights of teenaged girls.

"Fifteen-year-old girls might not be ready to get married, for physical or other reasons," she said.

For the Islamists, there is nothing wrong with the planned legal amendments.

"Islam allows marriage as long as the male and female are mature. Sexual and mental maturity could happen before the age of 18," said Hammam Said, leader of Jordan's Muslim Brotherhood.

"So, if a judge sees that a girl can handle marriage physically and mentally, there should not be a problem. Why can't she get married?"

Women make up nearly half of conservative Jordan's six million population, 70 percent of which is under 30.

"Some girls under 18 get married because their families want to ease their financial burdens and tackle unemployment," said University of Jordan sociologist Issa Masarweh.

"These marriages lead to disasters. They deprive girls of education and they become ignorant about their rights, becoming subject to violence," said Masarweh.

In Jordan, between 15 and 20 women are murdered each year, often by close relatives in so-called "honour killings" involving allegations of adultery or sex outside of marriage.

Jamil, the young mother of seven, said she will not let her 11-year-old daughter suffer her fate.

"Lara must finish her education first and build her future the right way. I won't let the same thing happen to her."