A Picasso Inside 'Blue Room' 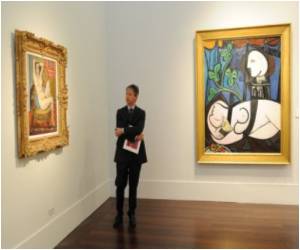 A painting of an unknown bearded man has been discovered in Pablo Picasso's "Blue Room", suggest a US museum attempting to put an end to an age-old question.

The 1901 work, from the legendary Spanish painter's Blue Period, depicts a woman bathing in her bedroom.
Advertisement

But experts have suspected since the 1950s another painting was hidden on the canvas, said Sue Frank, assistant curator for the Phillips Collection in Washington, which owns the painting.


In 2008, an infrared analysis of the canvas gave a preliminary confirmation there was a painting behind the painting, but it was only in recent months, through testing of the pigments, that experts were able to say with confidence that "this unknown portrait is a Picasso painting," Frank said.
Advertisement
The testing was done by the museum, which has held the work since 1927, in collaboration with Washington's National Gallery of Art, Delaware's Winterthur Museum, and Cornell University.

Now the investigation will continue as experts try to identify just who the man in the painting is.

He looks to be in his 40s and, by his clothing, appears to be relatively well-off, Frank said. Some names suggested include art dealer Ambroise Vollard and critic Gustave Coquiot -- but for the moment, nothing is a perfect match.

Back then, "canvas was expensive and (Picasso) was very poor," said Frank, explaining why the artist may have chosen to reuse the same canvas.

"The Blue Room" isn't the only example of a painting over a painting, she added.

The discovery will permit the art community to "increase our understanding of (Picasso), how he became this incredible artist," the curator said.

The painting is currently part of a traveling exhibit in South Korea but will star in a display in Washington in 2017.

Oil Painting at a Spanish Shop Certified as Early Work by Dali
An oil painting sold over two decades ago for around 150 euros ($200) at a Spanish antique shop, ......