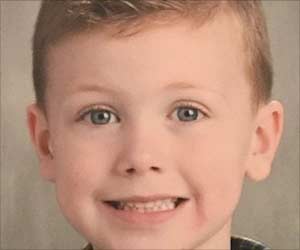 Gavin Clampett, a seven-year-old boy who was in the first-grade, was teased and bullied by his classmates for his Tourette's Syndrome.

He is from Connecticut and has taken matters into his hands by creating a powerful video explaining the syndrome. His 9-year-old sister, Brynn help Gavin in the making of the video.

Advertisement
‘Gavin was five years when he was first diagnosed with Tourette's. The hiccups can be noticeable or unnoticeable, sometimes quiet or loud.’

Tourette Syndrome, a neurological disorder. The syndrome causes Gavin a variety of motor and vocal tics like grunting, sniffing and blinking.


Gavin was five years old when he was diagnosed with Tourette's. The tics are like hiccups; they could be noticeable or unnoticeable, quiet or loud.
Advertisement
Gavin added, "They are like a hiccup and it just does it and I can't stop. My jaw goes up and down. I have noises where the spit swishes around my mouth and I have noises that sound like I'm sniffling."

Gavin gets dirty looks from people, and kids make cruel comments of his tics and uncontrollable movements.

Rebecca, his mother, a job coach and esthetician said, "He did get a little bit of flack in school from his peers asking him to stop, so we ended up making a video explaining what Tourette Syndrome is."

Gavin went back to school and played the video to his classmates so that they can understand the syndrome.

Rebecca said that we can teach children to own it and stand up for it and educate people about the syndrome.

Brynn, his sister said, "School can be hard for all kids. Everybody knows you can have a tough day sometimes. I feel like my brother and every other kid who has Tourette's Syndrome are brave. So be kind to them and don't treat them different because they are just like you."

Children With Tourette Syndrome Have an Advantage at Language
Children with Tourette syndrome are faster at assembling sounds into words - the part of language .....