3,600 Indigenous Colombians Who Dropped Out Of School Will Get Digital Tablets To Resume Studies 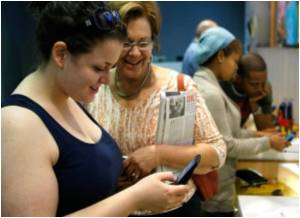 Officials said that some 3,600 indigenous Colombians who dropped out of school have received digital tablets to enable them to resume studying in their native languages.

The initiative is targeted at natives between the ages of 15 and 50 and aims to help graduate from high school and become community leaders.

Authorities hope the tablets will also help indigenous Colombians learn to read and write in Spanish, as well as in four native languages.


The educational material -- meant to complement classes and books -- is on the devices and therefore these do not need Internet access.

The initiative was announced by authorities in the country's eastern Guainia department, in the Amazon rainforest.

Language Ability of Alzheimer's Patients Improves With Magnets
A brain stimulation technique - repetitive transcranial magnetic stimulation- has been used by ......

Research Explains How Bilinguals Switch Between Languages
According to new research, people who learn two languages at an early age seem to switch back and .....