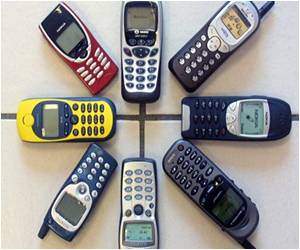 Proof of the world's first mobile phone comes in the form of a short clip uploaded on YouTube that shows a woman talking into a wireless device in 1938.

The short clip, which has been viewed 342,000 times on the video sharing website, is said to feature a woman named Gertrude Jones who is seen speaking on a pre-war prototype of a mobile phone developed by a communications factory in Leominster, Massachusetts, the Daily Express reported.

The video entitled 'Time Traveler in 1938 film,' had first been posted online a year ago and was widely reported on by various blogs, but it was only recently that a user who goes by the name 'planetcheck' came forward, claiming that the "woman is my great grandmother Gertrude Jones."


The user said that Jones was 17 years old and when the user asked her about the video, she said that she remembered it quite clearly, saying that Dupont had a telephone communications section in the factory.
Advertisement
'Planetcheck' asserted that Jones said that Dupont had been tinkering with wireless telephones and she and five other women were given these wireless phones to test out for a week.

The user added that in the video, she is talking to one of the scientists, who is holding another wireless phone, and is off to her right as she walks by.

If the claims are true then it means that the clip was shot more than 40 years before the first cell phone, a DynaTAC 8000x, was made available.

Increase In Number Of Resumes Sent Through Mobile Phones by Job Seekers
It has been revealed that job seekers desperate for a new role this year, are turning to their ......

Mobile Phones Not Worse Than Taking Hot Bath for Kids?
A new government health leaflet in the UK is not advocating precautions when it comes to mobile ......

Friendships may Fade Away Due to Addiction to Mobile Phones
A new study has revealed that mobile phone addiction is eroding our personal relationships....