11 Million African Lives Could be Saved by Small Investment 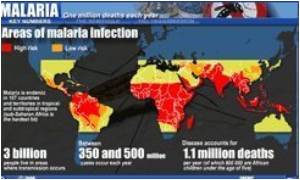 The Partnership for Maternal, Newborn & Child Health and the Countdown to 2015 Decade Report (2000-2010)has said that in the next five years, 11 million African women and children could be saved by creating near-universal availability of key life-saving interventions.

The Countdown report estimates that these interventions -- antenatal care, emergency care at the time of birth, post-natal care, treatment of childhood illnesses, and immunization, among others -- will cost an additional $32 billion, or about $8 per person per year over the next five years. This would allow 95 percent population coverage.


This achievement would bring most African countries in line with UN Millennium Development Goals (MDGs) 4 and 5, which call for reducing the number of deaths among children under 5 by two thirds, and reducing maternal deaths by three-quarters by 2015.


Africa, with 11 percent of the world's population, accounts for more than half of its maternal and child deaths, 85 percent of malaria cases and 72 percent of HIV/AIDS related deaths. The continent also has the world's lowest average life expectancy, experiences the highest proportional yearly increases in communicable diseases, and faces an ever-growing burden of non-communicable diseases such as diabetes, cancer, and heart disease.

Countdown to 2015, a global scientific and advocacy movement, tracks progress in maternal and children health in 68 high-burden countries where more than 95% of all maternal and child deaths occur. In its 2010 report, Countdown found that 49 out of the 68 high burden countries are not on track to meet MDG 4 on child health. Thirty nine of the 49 countries that are not on track to reach MDG 4 are in Sub-Saharan Africa, and that progress has not been sufficient to meet MDG 5, again particularly in Sub-Saharan Africa.

"Africa's ministers of health need tools to help them make the case for more spending," says Modou Diagne Fada, Minister of Health of Senegal. "Yet more money and better use of the money is needed to further improve health outcomes of our population, especially that of women and children."

The main topic and theme of this year's African Union Summit, to be held in Kampala, Uganda, July 19-27, is "Maternal, Infant and Child Health and Development in Africa."

The focus on the health of women and children is also gaining impetus beyond Africa. With only five years left to achieve the Millennium Development Goals, United Nations Secretary-General Ban Ki-moon in April announced the development of a Joint Action Plan to intensify the global effort to improve the health of women and children. The Action Plan will be launched at the MDG Review Summit in September.

UN Deputy Secretary-General Mrs. Asha-Rose Migiro, who will address the African Union Summit, says that the Joint Action Plan relies on collaboration and optimal contributions from all stakeholders. The Joint Action Plan also proposes accountability to ensure that commitments are delivered.

Findings from the Countdown to 2015 report, as well as the Joint Action Plan, point to the need for stronger financial, political and service delivery commitments for the improvement of the health of women and children, particularly in Africa.

Global health alliances and other development partners are aligning their efforts in an unprecedented manner to urge for increased commitments to improve the health of Africa's women and children.

Development partners are working together on the sidelines of the African Union Summit to call for increased resources for health on the continent. Ten partners are working with the government of Uganda to organize an event entitled 'Global Health Partners working for Women and Children in Africa' on 26 July 2010. Organizers, which include the Global Fund, UNAIDS, The Partnership for Maternal, Newborn & Child Health (PMNCH), Johns Hopkins Bloomberg School of Public Health, the UN Foundation and GAVI Alliance, Roll Back Malaria, the UN Foundation, UNITAID, Friends Africa, United Against Malaria and the African Leaders Malaria Initiative will be calling for increased national health spending and Global Fund replenishment.

The burden of poor health has hampered development on the continent. Global yearly losses in productivity attributed to maternal and newborn health problems alone amount to $15 billion.

"Not to invest in the health of African populations would be to fail them, especially when we know how much is required and what we stand to gain," says Graca Machel, an advocate for African women and the wife of Nelson Mandela.

Health spending has for too long been viewed by stakeholders as a consumption cost, according to Netsanet W. Workie, senior health economist for the World Bank's Africa Region.

"The truth is that a rather modest additional investment in health can save millions of lives in these countries, improve the overall health of their populations, strengthen their health systems, and provide economic gains through increased productivity of their national workforces," says Workie.

Political Will and the Continuum of Care

"We have the tools to improve maternal health and child survival," says Flavia Bustreo, M.D., Director of The Partnership for Maternal, Newborn & Child Health, a group of more than 300 organizations, foundations, institutions, and countries that is a leader in the effort to improve maternal and child health. "What we need is the political will and commitment to make it happen."

"This is a multi-layered problem that can be addressed with a combination of many, very simple interventions. No single intervention is sufficient," explains Pius Okong, M.D., of the Uganda Christian University, Head of Department Ob/Gyn at San Raphael of St. Francis Hospital Nsambya, Uganda, and member of the International Federation of Obstetrics and Gynecology.

"There are multiple interventions and practices that have been proven to save lives. What is required is sufficient coverage of these different interventions along the continuum of care including family planning, breastfeeding, hand washing, skilled attendance at delivery, and childhood immunizations.

"What we also need is community engagement to keep leaders accountable; political leadership is a necessary complement to the additional funding that we require," Dr. Okong says.

Poor health spending on the continent contributes to Africa's dire health status. Despite multiple health problems, spending in Sub-Saharan Africa is the lowest in the world, averaging $24 per person per year, followed by South Asia with average spending of $31, and by East Asia and the Pacific with $71.

In addition, more than half of the health spending in Sub-Saharan Africa comes from out of pocket payments from households, which means that healthcare spending can have a catastrophic impact on poor families, pushing many into extreme poverty and preventing those who are not able to afford care from seeking it.

At a 2001 meeting in Abuja, African governments agreed to allocate 15 percent of their budgets to health, yet, to date, only six countries have met this commitmentRwanda, Botswana, Niger, Malawi, Zambia, and Burkina Faso.

"The emphasis is always on the need for more external aid, but internal funds are the main source of health funding," notes Workie of The World Bank. "National authorities need to recognize and honor their financial commitments on health."

Even when commitments are honored, research by the African Public Health Alliance and 15% + Campaign shows that, for some countries, 15 percent is not sufficient. Four of the six countries that are spending 15 percent of their budget on health spend $14 or less per capita on health.

The alliance's research also shows that more than half of Africa's 53 governments invest $14 or less per capita, with some investing as little as $1 to $4 per capita on health. While priorities vary by region and country, those amounts are well short of the WHO recommended minimum health expenditure of at least $40.

"Presently priority investment goes to ministries that are considered to be income generating and health is not put in that category," says Professor Moses Chirambo, Malawi's Minister of Health. "We need to demonstrate to our governments that health should be placed in this category."

The upcoming African Union Summit, to be chaired by the President of Malawi, provides African governments with the opportunity to restate their commitments to the health of women and children.

"This is not just about resource mobilization," says African Union Commissioner for Social Affairs Bience Gawanas in a recent AU statement. "It is also about the effective use of available resources. For example, you could have your hundred thousand or hundred million dollars, but the important thing is how effectively you use those available funds, and how you prioritize and where you prioritize your spending. "

Weak health systems perpetuate poor health status in Africa. Among the contributing factors that hamper provision of services are inadequate numbers, quality and distribution of health workers, lack of medicines and equipment, lack of and poor existing infrastructure, and inadequate health information systems.

Sub-Saharan Africa averages 1.15 health workers per thousand citizens, accounting for only 3 percent of the world's health workers. Seventy percent of women have no contact with health personnel following childbirth.

The lack of access to emergency obstetric care contributes to maternal mortality in some African countries, such as Chad, Madagascar, Burkina Faso, Nigeria, Cameroon, and Mali, where fewer than 5 percent of women have access to this kind of care.

In addition, 50 percent of Africans do not have access to essential drugs. The provision of inexpensive and safe drugs for acute respiratory infections, diarrheal diseases, tuberculosis, and malaria alone could save up to 10 million lives in developing countries.

Poor quality of services and lack of accessibility due to poor distribution of health infrastructure and workers, especially in rural areas, also impact the use of health care services by populations. People are not aware of the services available and do not know when seeking care is necessary.

The news, however, is not all bad, for progress is being made. For example, the 2010 Countdown to 2015 report shows that of 68 high burden countries, 19 are on track to achieving MDG 4 to improve maternal health, and that five of these-- Botswana, Egypt, Eritrea, Malawi and Morocco-- are in Africa.

Making better use of resources

In their efforts to improve health conditions, a number of African countries have found ways to use their existing resources more efficiently and to overcome the barriers to care. Some are providing free or very low cost maternal and childcare, others are training additional workers for remote, hard to serve areas.

"We know the problem of maternal, newborn and child mortality and infectious diseases can be solved even in the poorest countries," says Rotimi Sankore "but it will require the commitment of both African governments and donors, and considerable ingenuity to make the best use of existing resources. We are seeing that countries like Malawi and Rwanda amongst others are making progress in saving the lives of women and children, and improving overall health for their citizens."