What is Colorectal Cancer?

Colorectal screening is done using a number of tests like stool tests to detect the presence of blood, endoscopic tests like and flexible sigmoidoscopy and radiological tests like double contrast barium enema and CT colonography.

Colorectal cancer i.e. cancer affecting the lower digestive tract comprising of the colon and rectum) is among the most common cancers affecting both men and women. Worldwide statistics indicate that 663,000 cases in men and 570,000 cases in women were reported in the year 2008. The American Cancer Society estimates that in 2011, about 141,210 people will be diagnosed and about 49,380 people will die due to in the United States. 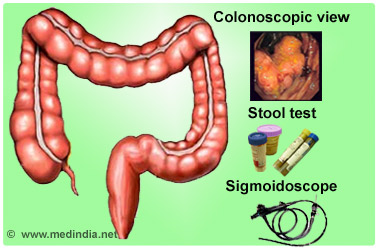 The number of cases in India is much lower than in the western world, thanks to the Indian lifestyle and dietary habits. However, as more and more people shift to a western lifestyle, the chances of developing are also on the rise. In fact, Indians migrated to the western world show an increased incidence of colorectal cancer compared to those back home.

Colorectal cancers usually arise from polyps. Polyps are small grows that arise from the inner lining of the colon and rectum. Not all polyps are cancerous; but since they have a chance of developing into the cancer, early diagnosis through screening and removal of these polyps plays an important role in preventing colorectal cancer.

Tests used in the screening of colorectal cancer are:

Colonoscopy is currently one of the most sensitive tests to detect colorectal cancer.

1. Who should undergo screening for colorectal cancer?

All individuals over the age of 50 years at average risk for developing colorectal cancer should undergo routine screening.

2. How often should a person undergo screening for colorectal cancer?

3. What are the stool tests used to diagnose colorectal cancer?

The stool tests used to diagnose colorectal cancer are:

These stool tests detect the presence of blood in the stools. Colorectal cancers often bleed, thus positive fecal occult blood tests suggest the presence of a cancerous lesion, which requires further investigation. However, the enzymatic fecal occult blood test is not entirely reliable and can give false positive results i.e. show the presence of blood in the stool in the absence of any bleeding. This could occur if the person has eaten certain foods like red meats, certain fruits or vegetables, or has taken medications like non-steroidal anti-inflammatory agents. This test also cannot differentiate whether the bleeding has occurred from the upper digestive system like the stomach, the intestines or the lower digestive tract comprising of the colon and rectum.

The fecal immunochemical test, on the other hand, detects bleeding only from the lower digestive tract and its results are not affected by what the patient eats.

Bleeding from cancers may not occur continuously; thus these stool tests have to be repeated more often to detect cancer. They also have to be carefully carried out according to the instructions from the kits manufacturer for best results.

Other tests like those detecting abnormal DNA in the cells shed in stools have also been developed.

4. What are the endoscopic tests used to diagnose colorectal cancer?

Flexible sigmoidoscopy is a procedure where the sigmoid colon or the last part of the colon is examined. It is a quicker procedure than colonoscopy and does not require sedation. Unfortunately, since it does not examine the entire colon, some cancers especially right-sided ones could be missed in this examination. In colonoscopy, the entire colon is examined. Colonoscopy has the advantage that they are very sensitive in detecting colorectal cancers. During colonoscopy, any abnormal lesion like a polyp or suspicious lesion can be directly removed; thus treatment may be carried out in the same sitting. However, the patient has to undergo a diet and bowel preparation procedure before undergoing colonoscopy so that the doctor can examine the inner lining well. This preparatory procedure may not be acceptable to all.

5. What are the radiological tests used to diagnose colorectal cancer?

Double-contrast barium enema is a procedure where a barium enema is administered to the patient followed by insufflation of air through the anus. Thus the barium coats the colon wall from the inside and can detect any abnormality in the lining on subsequent x-ray. Here again, the patient requires bowel preparation and may face some discomfort during the procedure. It is a good procedure for people who cannot undergo colonoscopy for some reason.

CT colonography, also called virtual colonoscopy, is a relatively new procedure that uses CT scan for screening of colorectal cancer. It is as sensitive as a colonoscopy. It does require bowel preparation and insufflations of air through the anus and exposes the individual to radiation. If an abnormality is detected on CT colongraphy, the individual will also have to undergo a subsequent colonoscopy to obtain a biopsy or remove the lesion. CT colonography however can also detect lesions in the abdomen outside the colon.

1) Which doctor should I visit for screening for colorectal cancer?

You should visit your general physician or gastroenterologist for the screening test.

2) Which test should I opt for screening for colorectal cancer?

The choice of screening test depends on a number of factors. First of all, the test should be available in your area. Secondly, it depends on your personal preference. Before deciding, you should also consider which test will diagnose your condition better  for example, a stool test may be very easy to perform, but its accuracy is much less than that of a colonoscopy.

3) Why should a fecal occult blood test be done yearly whereas a colonoscopy every 10 years?

Sleep Deprivation Increases Colon Cancer Risk
In a recent study it was found that lack of sleep ups the risk of colon cancer.

Scientists Identify Protein Behind Colorectal Cancer Treatment Resistance and Recurrence
A protein called ABCB5 in colorectal cancers that increases treatment resistance and recurrence of the tumour has been identified by scientists at the Children's Hospital Boston.

Folate-fortified Diet May Reduce Colorectal Cancer Risk: Study
A new study establishes the link between high folate intake and reduced risk of colorectal cancer, a finding consistent with the findings of most previous epidemiologic studies.