Meniscectomy is a surgical procedure to remove the torn meniscus from the knee joint. In order to understand this procedure, it is important to understand about the menisci.

Menisci are two fibrocartilagenous crescent-shaped wedges in the knee joint that play an important role in shock absorption. They bear the load of an individual on the knees and perform the roles of lubrication, secondary stabilizers, and nutrition in knees. Each meniscus has 3 separate regions. The red-red zone is the outer zone that is permeated with blood vessels and nerves. The inner white-white zone is devoid of blood vessels and nerves. The intermediate junction is the red-white zone that is the interface between the red and white zones. 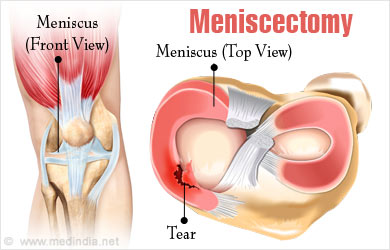 Reasons for Doing a Meniscectomy

As elaborated in the previous section, meniscectomy is performed to remove injured menisci of knees. An injured meniscus of knee causes problems in motion and individuals experience localized pain and swelling, and therefore, may require surgical treatment.

The surgeon takes account of the kind of tear in the meniscus, the location of the tear, the stability of the injury, the length of the meniscal tear, the age of the individual, the relative health of the knees, and the activity level of the individual before deciding on the procedure to be adopted for meniscal tears. A small tear in the red-red zone usually heals on its own without surgery. Moderate to large tears in the vascular zone heal well and can be repaired. If the tear extends into the white zone, it is better to resect or cut off the torn part since it is difficult to heal. 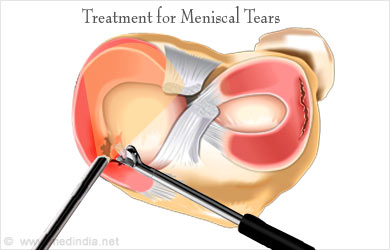 How is meniscectomy performed?

Prior to the surgery, the doctor will request for blood tests, a physical exam, an MRI scan of the knee joint and an X-ray. The patient is advised not to consume any food or drink following midnight on the day of the surgery. The patient should inform the doctor of any medications being used. The doctor may advise the patient to avoid taking certain medications at least 1 week prior to the surgical procedure. During the procedure, depending on the type of surgery, the anesthesia may be general, local, or spinal.

Arthrotomy  As mentioned earlier, when the meniscal tear is more extensive and extends into the inner regions of the meniscus, complete recovery of the meniscus may be difficult. Open meniscectomy is preferred over arthroscopy, in such cases. A large incision is made in knees and the cut is closed with sutures at the end of the procedure. The recovery period is longer in such surgeries.

Arthroscopy  In arthroscopy, small cuts or incisions are created around the knee. An arthroscope that is fitted with a camera is inserted through this incision to get a full view of the internal region of the knee. A drain is also placed to remove excess fluid. Care is taken to remove very little cartilage as possible. The incisions are closed with sutures. Patients recover in a shorter time and can resume their normal duties faster. 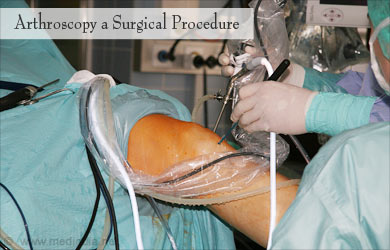 What are the Risks Associated with Meniscectomy?

Some of the risks associated with meniscectomy are deep vein thrombosis and infection. Deep vein thrombosis of the operated leg can be life-threatening if the clot travels to the heart. Bleeding in excess, pain that remains unchanged or starts to worsen, swelling of the knees, weakness of the knee joint, are other complications of the procedure. There is a risk of damage to the nerves with meniscectomy. With partial or complete removal of the meniscus, the capacity of knees to deal with load-bearing activities, such as running or walking, is reduced.

Sometimes, meniscectomy is not the only cause of complications in knees; the patient may have some predisposing factors as well. Prolonged illness, smoking, certain medications, blood clots, and lack of nutrition can also increase the complications to knees that have undergone meniscectomy.

Patients who undergo meniscectomy find that pain reduces within 1 week of meniscectomy. Patients are prescribed pain medications, and may be prescribed drugs to prevent blood clots as well as antibiotics to prevent infection. Swelling in knees disappear within 4 to 6 weeks following surgery. The patient requires physical therapy for around 4 weeks. Running or rotation is avoided for nearly 16 weeks.

Following meniscectomy, patients should take care to perform the recommended exercises. Based on the doctors directions, knee splints or crutches should be used.

Please inform the doctor if there is any discoloration or swelling in toes, nausea, vomiting, fever, pain, swelling, redness in calves or the surgical sites, chest pain or shortness of breath, following meniscectomy.

Common Knee Surgery Not Really Better Than the 'fake' Version
A new research has just suggested that a common knee surgery could possibly not be better than the 'sham' procedure.

Study Says Knee Surgery Not Needed for Mild Osteoarthritis
Middle-aged or older patients with mild or no osteoarthritis of the knee may not benefit from the procedure of arthroscopic knee surgery, says study.

Azithromycin may Cause Sudden Cardiac Death
View all