are live microorganisms that resemble the good bacteria in our gut. Science is yet to fully explore the healing potential of probiotics; meanwhile some studies have ruled in their favor. 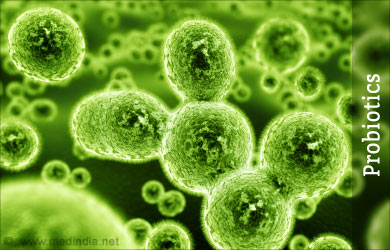 The World Health Organization and the Food and Agriculture Organization of the United Nations define probiotics as live , which, when administered in adequate amounts, confer a health benefit on the host."

Since ancient times, such as fermented products and cultured milk have been around. But it has been only of late that there has been a great demand for probiotics with the markets flooding with probiotic supplements and foods.

Most of the probiotic bacteria belong to two groups - Lactobacillus or Bifidobacterium, each of which further contains several species. Another probiotic, Saccharomyces boulardii, a type of , belongs to the fungi family.

Yogurt is a good source of probiotic bacteria. Probiotic bacteria are also present in other foods such as fermented and unfermented milk, tempeh, miso, certain varieties of juices and soy beverages. In these foods, the bacteria may have been originally present or might have been added during preparation.

Probiotics are also available as in the form of capsules, tablets, or powders in sachets.

Prebiotics, on the other hand, are foods or nutrients that are used by specific bacteria. They can be added to the diet to increase the chances of the particular bacteria growing and thriving in our system. Fructooligosaccharides (FOS), the classic example of prebiotics, consist of compounds made up of fructose sugar molecules connected in long chains. They occur in natural foods such as tubers, leeks, onions, honey, certain grains and also in Jerusalem artichokes.

It is interesting to note that our bodies harbor multitudes of bacteria in places like the gut, skin and orifices. Each of our bodies has a different combination of microorganisms. The friendly bacteria that we harbor are essential in maintaining and developing our immune system which guards us against diseases. To a large extent, the interaction between an individual and the microorganisms present in his body as well as the interaction between these indigenous microorganisms, determine the well being of the person.

It has been found that there are cells in the intestine that are connected to the immune system. When probiotics are added to our diet, the microorganisms already existing in our gut may be manipulated to improve our defense mechanisms.

Latest Publications and Research on Probiotics - Support System for the Gut

More Probiotics in Your Diet Could Ensure Better Mental Health
Neurochemicals delivered directly to the gut, via probiotic (referred to as good bacteria) promote gastrointestinal health and psychological well-being, reveals a new study.

Probiotics to Treat Infectious Diarrhea
A recent Cochrane review study has found that probiotics can reduce the duration and severity of infectious diarrhea in adults and children.

Probiotics Useful in Preventing Necrotizing Enterocolitis in Preterm Infants
Probiotics are useful in preventing a serious complication called necrotizing enterocolitis in preterm infants. Recently published guidelines suggest the use of these agents in most premature infants.

Your Guide to a Good Gut
Bothered by digestive problems? Try adding prebiotics and probiotics in your diet for a good gut and better digestive health.

Daily Calorie Requirements The Essence of Yoga Drug Interaction Checker Diaphragmatic Hernia Pregnancy Confirmation Calculator Vent Forte (Theophylline) Post-Nasal Drip Drug - Food Interactions Drug Side Effects Calculator Accident and Trauma Care
This site uses cookies to deliver our services. By using our site, you acknowledge that you have read and understand our Cookie Policy, Privacy Policy, and our Terms of Use