When is balding premature? The answer for most people seems to revolve around the need to be attractive to the opposite sex. So if you are in your teens and twenties and seem to be losing a serious amount of hair, you are prematurely balding. In fact, about half the people who visit a doctor about hair loss are less than twenty years of age and worried about premature balding.

Most cases of premature balding, like balding in general, begin with the hair becoming thin. You might start to notice that the strands of hair left on your brush are finer than they used to be, and also that you are seeing more scalp than usual through your hair. Caught at this stage, hair fall is easiest to treat and reverse.

Losing your hair is a natural part of the body's ageing process. In fact about 10% of the approximately 100,000 hairs on your head are currently in a dying stage, more than 100 of them a day fall out and it takes up to six months for the follicle to rejuvenate and produce a new strand. Over the course of a life time the hair follicle becomes fatigued and shrivels making it increasingly difficult to produce new hair.

Many men find themselves going bald well before old age, sometimes as early as their twenties. This is known as premature male pattern baldness and starts out with receding hairline and thinning scalp. The reason for this is an increased production of testosterone after puberty, which is broken down into the hormone dihydrotestosterone (DHT) when it comes into contact with an enzyme found in skin. It is DHT that inhibits the follicle's ability to produce new hair in the crown region and upper forehead.

Approximately 30% of men, and a few women, suffer from male (or female) pattern baldness. It's largely a hereditary condition that we can do little about. Predispositions (such as a tendency towards obesity or alcoholism) can be dealt with but premature hair loss is 'written into your genes'.

Male pattern baldness affects many young men. Scientific research has produced a number of options for combating, and slowing baldness. There are many products on the market that can help you improve your image through hair thickening, scalp coloring and growth stimulation. The most recommended ones are available on our site.

Remember, male pattern baldness is a process that cannot be cured. But by spotting early signs of a receding hairline or thinning scalp it is possible to significantly slow the process. Orally taken remedies or hair transplants can prove to be costly and sometimes ineffectual. The most important consideration is to maintain your self-esteem and confidence by minimizing the poor image premature balding portrays. Many cost-effective creams, colorants and thickeners are available for this purpose.

Premature androgenic alopecia has been suggested as a feature of the male equivalent of the syndrome of polycystic ovary (PCOS). The hormonal pattern of a substantial number of men with premature balding resembles in some respects the hormonal pattern of women with polycystic ovary syndrome. It has been shown that women with PCOS can have both excess of body hair growth (hirsutism) and/or balding. A number of hormones in the metabolism of androgens are responsible for the symptoms and effect. The blood testosterone is converted to a hormone called dihydrotestosterone which directly stimulates the body hair follicles to grow.. Incidentally it is the same hormone which is also responsible for scalp hair loss.

Body hair grows in response to testosterone much more while the head (crown) hair follicles are actually sensitive to too much testosterone and balding is the result. As discussed earlier there are studies which show that there is genetic predisposition to premature balding in men (before age 30) who are siblings of women with PCOS.

Very useful and descriptive article to premature hair loss problems, these problems occur in youth when they are in 20's, the cause may be depression, improper diet and many factors.

Hi! This is something what am looking for. Great post here and I love your site because you have posted lots of useful information about hair loss.

Can someone guide me for hair loss prevention methods. I am in my early 20s and for the last couple of months I have realised that I am loosing a lot of hair and going slightly bald even on the sides above the side-burns. How can I stop this menace called "balding"?

Hair loss vitamins are another natural way to grow back healthy hair.

Smoking Leads to Age-related Hair Loss in Men
Asian men should kick the butt if they don't want their locks to fall off, for a new study has stated that smoking might be the cause of age-related hair loss among them.
READ MORE

Hair Loss in Men
A few men are only in their twenties when they begin to lose hair, but by the time men reach their fifties, more than 50% of them have what doctors would call 'significant hair loss'.
READ MORE

Hair Loss | Alopecia in Women
Hair loss or Alopecia can be emotionally devastating to women but understanding reasons behind hair loss can help in prevention and treatment of hair loss.
READ MORE

Sporting the Naked Pate: On Hair Loss and Balding
The madness of modern day life takes its toll, hair loss being the least of them. Here's all you need to know on hair loss and baldness!!
READ MORE 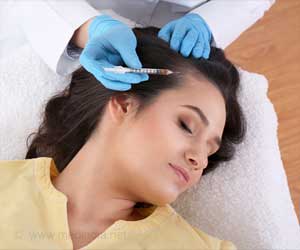 Plasma Treatment for Hair Loss - Frequently Asked Questions
Do you know which doctor should you consult for platelet-rich plasma therapy. This and other commonly asked questions about this condition.
READ MORE